Posted on September 3, 2010 by The Filmsmith | Leave a comment 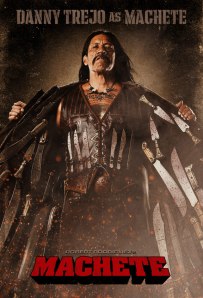 The summer film season is coming to a close, but there is plenty to look forward to. Here is your complete mega movie fall preview.

I believe that trailers reveal so much information that it can spoil or at least impede the experience of watching a film for the first time. I would recommend avoiding trailers if you know you’re going to see a film. If you’re unsure of a film, however, be my guest.

Based on the glorious fake trailer from Grindhouse, Danny Trejo gets to go on a killing spree in this Mexploitation from Robert Rodriguez. With taglines like “They just fucked with the wrong Mexican!” and somehow wrangling Robert De Niro to co-star with Jessica Alba, Lindsay Lohan, Steven Seagal, Michelle Rodriguez, Tom Savini, Cheech Marin, among many others, this will properly seal the summer season up with a bang – and probably a few laughs. Rodriguez is also one of the few directors making R-rated films action films, with most studio produced action films walk the PG-13 line to get more money. So be sure to support films for adults and see Machete.

The many trailers of Machete. This is the Grindhouse trailer:

And here’s the latest trailer, which shies away from its outlandish nature. Peculiar…

With the One Hour Photo director Mark Romanek at the helm of this Alex Garland screenplay (28 Days Later, Sunshine), adapted from the book of the same name by Kazuo Ishiguro, those elements alone should be enough to get you in the cinema.

Everyone was surprised that the much mocked Ben Affleck could actually direct with Gone Baby Gone starring his kid brother Casey Affleck as a legitmate badass. The Town marks Affleck’s second directorial project drawing from his hometown of Boston and it looks to explore similar themes of class as Gone Baby Gone. Starring Ben Affleck, Jon Hamm (Mad Men), and Jeremy Renner (The Hurt Locker), this could very well be a crime/action/drama comparable to Heat.

This trailer in particular may contain spoilers, but since the film isn’t out, I can’t be sure.

Though the message boards about this film have mentioned cinema audiences erupting with laughter as soon as M. Night Shyamalan’s name appears in Devil‘s trailer, this could be an interesting horror film (it isn’t directed by M. Night, it’s just an idea of his; I think the producers know his reputation and tried to keep him away from it). Five people go into an elevator, become stuck, and discover someone in the group might have some demon blood flowing through their veins.

This is on the list purely for Edward Norton, but it also features Richard Dreyfuss, Susan Sarandon, Tim Blake Nelson, and Keri Russell. Norton plays two twin brothers, one an ivy league professor another a drug dealer. Of course, hijinks ensue when they get back together. Norton is always good to watch, so this could be an okay comedy.

Philip Seymour Hoffman hit my radar as the tubby awkward boom mic operator in Boogie Nights. Since then he’s been an intimidating villain (Mission Impossible 3), an artistic genius (Synecdoche, NY) to…more roles as a tubby awkward guy. The point is that Hoffman can do anything, so his directorial debut should be just as inspiring as his filmography as an actor.

Ryan Reynolds plays a private contractor in Iraq who is buried alive. This could either be really bad (how long can you watch a guy sit in a coffin?) or a great claustraphobic thriller. There’s not a lot of in between.

Documentary on U.S. schools and how they are performing.