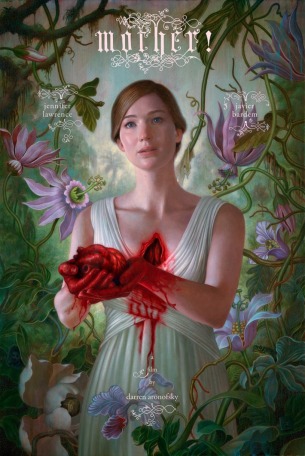 mother! is a scathing critique of patriarchal gender roles and a deformed, Cronenberg-esque literalization of the horrors of celebrity, all wrapped in a theological metaphor that paints God as a cosmic asshole we’d all be better off without. No wonder people are pissed about it.

END_OF_DOCUMENT_TOKEN_TO_BE_REPLACED

Anyone who has seen a film by Darren Aronofsky is not likely to describe it as a completely pleasurable experience.  My first experience with Aronofsky’s work was seeing Requiem for a Dream on the big screen.  It was good – but I avoided it for the next two years because of its intensity.

For Aronofsky is it not enough to show us the hardships of a protagonist. He has to actually make us feel the experiences of our protagonists.  In Black Swan Aronofsky continues to force us to suffer with our onscreen hero – and this time around you’ll be hard pressed to figure out why you should care. END_OF_DOCUMENT_TOKEN_TO_BE_REPLACED

And here I thought the film might be a bit boring from the synopsis and the trailer is more f*cked up than I could have imagined.  Guess Aronofsky won’t break into the comedy genre anytime soon considering this path of trauma that is his filmography.*

*Comments aside, love his work.

Three You Missed: Robert Downey Jr. and others

Given this weekend’s U.S. release of Iron Man 2 I wanted to bring to attention another Robert Downey Jr. film you’ll love and two others.

END_OF_DOCUMENT_TOKEN_TO_BE_REPLACED

...although this poster subtley tries to downplay the gay.

The struggle for political rights during the twentieth century highlighted the parallel importance of representation.  I bring this up because the largest reason a film like A Single Man can even be released is due to the representations of the homosexual community since the 1990’s (thank you Ellen, Gus Van Sant, and reality television).  With Brokeback Mountain five years behind us, something tells me there will not be too many protests over this one.

Colin Firth stars as George Falconer, a professor of English whose boyfriend of sixteen years, Jim, died in a car accident eight months ago.  Kissing Jim’s cold limp lips at the snowy scene of the crash, the film opens with George waking from this bad dream.  A fountain pen lies near his hand, bleeding all over his white bed linens, carrying dream into reality.  Kicking his day off with such melancholy, George surveys himself in the mirror: “Just get through the goddamn day.”

George’s “goddamn day” is punctuated by memories that flood his mind with the suddenness of a thunderclap or are interrupted by moments of serenity: the world floods with color and George basks in the glow of the moment, be it the beauty of a secretary or children playing in a yard.  Nevertheless, the moment always wanes, giving way to George’s default depression.

The flood of memories and dreamlike moments of serenity are occurring because this is George’s last day on Earth.  Intending to commit suicide at the end of the day, George teaches his class, buys bullets for his revolver, and empties his safety deposit box.  All of his important documents, keys, letters to friends and the suit in which he is to be buried are laid out in meticulous order.  Now for George to do the deed…

Much has been made of this film not only for Colin Firth’s performance (excellent and subtle), but for the work of director Tom Ford.  Well known as an American fashion designer, Ford’s day job reveals itself in the film’s chic-moderne look and the men George meets during his day (Kenny and Carlos), who were pulled from Derek Zoolander’s School of Ridiculously Good Looking Models.  Don’t get me wrong, Firth is handsome, but Nicholas Hoult (Kenny) and Jon Kortajarena (Carlos) were selected for their eyes and jaw line, not to serve the story.

And here is the film’s major flaw: an over-reliance on aesthetics to drive the story.  Ford’s set design and costumes, though interesting to look at, keep you at arm’s length emotionally.  The music clobbers you and the voice over lacks a solid goal.  If the ridiculously good looking Kenny and Carlos don’t bring a smirk to your face, the film’s conclusion, SPOILER ALERT wherein George decides not to bite a bullet, but immediately dies from a heart attack, should make you laugh since this is the stuff of comic book or The Twilight Zone zingers. SPOILER ALERT OVER

The last film to tackle the death of a loved one using music and visuals to drive the story was Darren Aronofsky’s The Fountain.  Though you may not know what the hell is going on during Aronofsky’s meditation (it definitely needs to be watched more than once), his visual and musical aesthetic at least made me feel something. 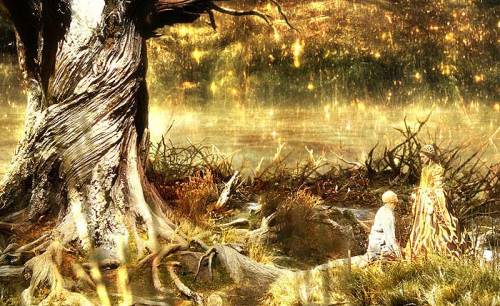 Imagine this on a proper cinema screen. This is how you engage with visuals.

A Single Man will likely leave the viewer as blasé as George.  Though a good addition to a growing list of films about homosexual relationships, it doesn’t deliver the type of emotional knockout we know lurks beneath George’s surface. 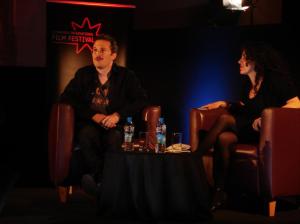 As was the same with the Sam Mendes talk: I was able to get a last minute ticket for the Darren Aronofsky event that had been sold out. I secured a front seat and the following video footage below. I did not have enough memory on my camera to cover the entire talk, so the rest is dictated word for word from my old school tape recorder (I really need to buy a digital one…).

Worth highlighting are his thoughts on 3D, music from his films cropping up in shitty trailers and sports events, and why some people hate The Fountain towards the end of Part 6. Please leave your thoughts at the bottom.