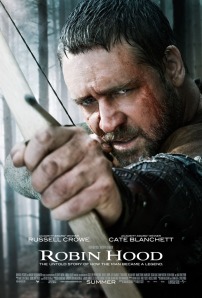 It has been a decade since Russell Crow and director Ridley Scott teamed up for the Spartacus remake, Gladiator and with Crowe’s star status cemented, the two have come together to again mix legend and history in Robin Hood.

In this origin story of the hood Robin, we see the English laying seige to a French castle in 1199.  This is the last stop on their way home after a Crusade that has left some, like Robin Longstride (Russel Crowe), feeling they did the Devil’s work, not God’s.  When King Richard the Lionheart is killed in battle, Longstride and Company take the news to England under the guise of Knights.  When Longstride goes to return a sword to the family of Loxley (whose namesake he has stolen), he assumes Loxley’s position as husband to Marion Loxley (Cate Blanchett) to keep the land from tax collectors (before Robert Loxley left for the Crusade, he failed to have children, and women aren’t allowed to own land at the time).  Cue combative, but gradual romantic interest.

Meanwhile, King John accepts the advice of Godfrey (Mark Strong) who is plotting to divide England in order to weaken the country before a French invasion.  During this time Godfrey is also trying to track down Longstride, who could reveal him as an agent for the French.

The last major foray into Nottingham Forest was helmed by American Kevin Kostner.  It was a fun adventure flick with few British accents and lots of pretty people.  With Ridley Scott, however, no one comes out clean – literally.  Scott’s attention to the messiness of Middle Age living (and Crusade conquering) makes you want to wipe your hands clean of the mud and blood.

This is why a Ridley Scott film differs from other action films of late: you get to experience realistic events without an overabundance of CGI (that you can see, anyway).  The battles are cringe worthy, prompting one to wonder, “How many stuntmen were killed to make this?”  So in this regard, Scott knows how to make a good old fashion action movie.

However, the plot is an over stuffed burrito exploding in the microwave.  Throw in how Robin Hood has something to do with the Magna Carta and you’ll be poking your neighbor asking for a guide-book.

And again with the women needing saving (see Iron Man 2 review): Marion goes off to battle in her father’s armor, but when she confronts Godfrey (who killed her father), she has to be saved by Longstride.

Dear Hollywood: quit giving token empowerment to women.  If you’re going to make female characters badasses, then let them do the cool thing at the end before pulling the rug out from under them so the man can make the touchdown instead.

Largely, the film’s plot is what hurts it the most.  It tries to go back and forth between the conflict on the Royal front and the life Longstride is building with bumbling difficulty.  Further, the only person I was excited to see in the film was William Hurt, who continues to pop up in random supporting roles (A History of Violence, Mr. Brooks) and God love him for it.  Blanchette and Crowe are okay, but Hurt and Mark Strong are the interesting ones (Hurt for his acting, Strong for his hawk head/mean look).

The film is one of those “eh” film experiences; it could have been worse, but it’s not great.  For me, the Disney version of Robin Hood remains great and even Kevin Costner’s version might still be better than Scott’s.

My rental suggestions aside, if you’re trying to select a film to see at the cinema I would direct you to the metal of arms of Tony Stark or even Neil Marshall’s Centurion before telling you to see Robin Hood.  Just because it stars Russell Crowe and is directed by a Brit don’t make it awesome.

For the love of God do not take this film as history lesson. 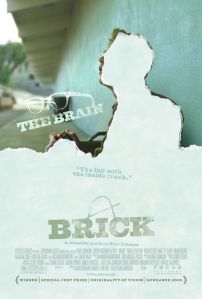 We are a rather fortunate bunch. Our grandparents only had two chances to see a film: either when it came out in theatres or if it popped up on television, which is what made the annual television screenings of The Wizard of Oz such a big deal. It was not until VHS revolutionized the industry and films could be watched whenever we desired. Combine this with the communication powers of the internet and a film that never got past screenings in New York can suddenly make a ton of cash and notoriety.

With such fortunes, I find it our job as film enthusiasts to promote our favorite smaller films as a counter-weight to the advertising juggernauts that rumble across our cultural plains. END_OF_DOCUMENT_TOKEN_TO_BE_REPLACED