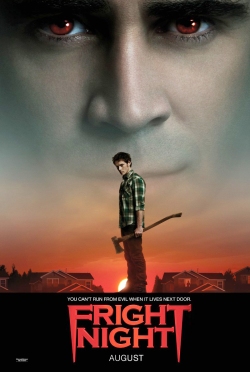 The 1985 horror film Fright Night is an imperfect classic:  The oscillating tones of hilarity and horror are undermined by goofy over-dramatic synth soundtrack (yet still charming), as the whiny Charlie Brewster decides what to do about the vampire next door.  Due to these imperfections in the original, the recent remake is a worthy re-telling of the 80’s original.

Anton Yelchin plays Charley Brewster, a recent nerd turned popular after securing the affections of blond hottie Amy Peterson.  Of course, Charley’s quick rise to power leaves some dorkier friends behind. One of them is “Evil” Ed Lee, a geeky kid who warns Charlie that his new neighbor-that-oozes-sex Jerry Dandrige is a vampire.

Director Craig Gillespie’s last film was the quiet yet moving drama Lars and the Real Girl, and he brings a similar sensitivity to what could have been a mindless monster film.  The man lets the film breathe, with quiet shots of characters lost to the horror just witnessed or shots of the cookie cutter suburbia that plays a central figure to the film.  He also gets some aid from Buffy the Vampire Slayer scribe Marti Noxon, whose taut and amusing script offers some levity to match Gillespie’s visual pathos.

Fright Night of course would not be such a success were it not for the excellent cast:  Anton Yelchin’s version of Brewster draws the audience’s empathy better than his 80’s counterpart; Christopher Mintz-Plasse as “Evil” Ed is slowly but surely moving out of the shadow of his McLovin in Superbad; Colin Farrell’s animalistic intensity is the definition of “creepy”; and David Tennant as the Criss Angel-esque goof Peter Vincent takes the film to higher levels of hilarity as he tries to loosen his junk from leather pants or displays flagrant cowardice.

Even if there are problems with the Fright Night re-make (a terrible CGI car chase sequence; last second unnecessary character development for Peter Vincent; awkward fluff epilogue; useless 3D), the film has too many stellar moments to call it a bad film:  The simple scene of Charley getting Jerry some beer is like witnessing a diplomatic exchange with nuclear holocaust on the line, and Charley’s hide-and-seek venture to save a neighbor may almost rank with Jurassic Park‘s kitchen scene.

One of the film’s best moments, which speaks to the talents of Gillespie, comes when Charley is snooping around Jerry’s house. He opens a closet, finds several different types of uniforms (delivery man, cop, etc.) and then proceeds to discover a holding area for victims–several doors with delicate keys hanging from all but one door knob.  We’re shown, not told these things, mind you, and as they are revealed we’re horrified at the serial killer-like premeditation that Jerry has carried out (as opposed to the traditional “catch you in a dark alley” randomness of other vampire killings).  It’s classic monster movie structure (show things related to the monster before revealing it) and it works with a vengeance.

Finally, it’s also worth mentioning that the women of Fright Night are not fenced off from notions of agency like they are in the original. Charley gets his ass saved twice by the women in his life (his mother and Amy), though it’s still up to Charley to save Amy in the final act (you take what you can get I suppose).  Neither Amy or his mother are complete imbeciles and though they don’t get a lot of screen time, they feel like full characters, not just tools for plot points.

Though the Twilight films are so bad even cast members slam them, it’s worth putting up with the sparkle vamps since they have given rise to a resurgence of interesting American vampire films (Stake Land, Let Me In). Horror fans are better off with this Fright Night re-make.