Let Me In: “A dirge for American goodness.” 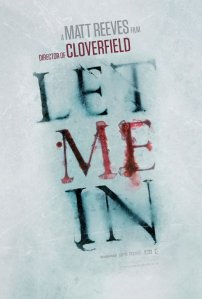 Let the Right One In was the recent horror phenomenon usually known as “the Swedish vampire flick.”  A combination of excellent actors, in-depth character development, and mature execution made it a top notch vampire film that blew other blood-sucker tales out of the water.  Hence, when Hollywood announced that a re-make was in the works, the original film’s fan base made their consternation known.    Even I went in with the most cynical of sentiments (“Did they just make it into an English language film for those too illiterate to struggle with subtitles?”).  Surprisingly, I left the cinema sunk deep in stunned reflection.

It’s 1983 in Los Alamos, New Mexico and 12 year-old Owen is struggling: his parents are in the midst of a divorce, he’s bullied by three jackasses that are twice his size, and his only solace is sitting at an empty playground singing the Now and Later candy advertising jingle.  Things start to change when fellow 12 year-old Abby moves in next door.

At the jugular of this vampire tale is a coming-of-age story.  Kodi-Smit McPhee’s performance as Owen is disarmingly genuine as he calls his estranged father looking for guidance – only to be quickly dismissed.  One scene in particular in which Owen is bullied recalls the abhorrent rape scene from American History X–it contains none of the male nudity, but conveys the same suffering and shame.  The touchier aspects of Let the Right One In involve the ambiguous gender of Eli (Abby) and her relationship with Oskar (Owen).  Surprisingly, Reeves subtly delves into this territory as Owen’s roaming eyes reveal his emerging sexual curiosity,  and in a scene in which Abby undresses out of focus to then lie next to Owen.

The film opens with American iconography that initiates the issues of inherent evil: Ronald Reagan is heard off screen giving a speech about such matters, and a photo of (a very Anglo-Saxon) Jesus Christ looks down on Owen as he steals from his mother’s purse. Ultimately Owen’s inaction reveals that the banality of evil may be more sinister than the murders performed by Abby.

Let us not forget that the film’s R-rating gives it some true bite: bullies taunt with the f-bombs all children know and when blood flows, it ain’t pretty.  Reeves uses the shocking violence as a motivation for reflection, not titillation, in a way reminiscent of Cronenberg’s A History of Violence.  Both directors are interested in how violence affects the characters, not the rise it provides for audiences.

One very striking element of the film is director Matt Reeves’ ability to show, not tell.  In avoiding this amateur mistake, Reeves reveals his expectations of his audience (that you aren’t a bunch of idiots) and shows that you’re in the hands of a professional.

The film does have a few warts: brief moments of CGI look ridiculously akin to Mr. Gollum and Chloe Moretz has a hard time conveying Abby’s melancholy without seeming one dimensional.

I would implore you though, let not these minor issues detract from an amazing film. Retelling the story of Let the Right One In involves not a mere change in languages, but wrapping American culture around the story in a way that fits like a comfy thrift store jacket.  The previously mentioned iconography of religious and political gods, along with the 80’s music and atmosphere, make this feel like a truly American film.

Given the last decade, it’s easy to see Let Me In as a dirge for American goodness.  One could argue that from the Cold War through Clinton era the assumption by U.S. citizens was that their country was good.  “We fought in Vietnam for freedom, passed the Civil Rights and Voting Rights Act.  What more do you need to do to prove inherent goodness?” Since the September 11th attacks, though, we have started a war we now know was based on lies and have violated the Geneva Convention by torturing prisoners.  MINOR SPOILER The fact that Owen’s inaction costs someone their life, SPOILER OVER and the juxtaposition with the previously mentioned iconography of “Good”, it’s hard not to feel ourselves in Owen’s place.  We are not only unsure of Owen’s identity, we don’t know who we are anymore.  Can there be atonement for the sins of Owen, our country, ourselves?

Let Me In is a film of such virtuosity that it calls to mind the horror greats from the 1960’s and 70’s (Rosemary’s Baby, Carrie), where exquisite directors came to the horror genre to make the films…not respectable, but damn good, in no small part due to their emphasis on character.  Reeves made sure to hew to this mantra and the result is one of the best vampire films in years.

*I will do a comparison of Let Me In to Let the Right One In in a later post.  On its own merits, Let Me In is fantastic.

11 responses to “Let Me In: “A dirge for American goodness.””