Eastbound and Down – Offensive, vulgar, yet touching. 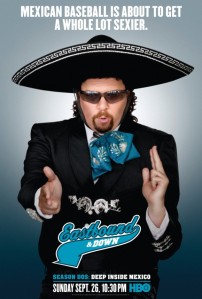 The second season of HBO comedy series Eastbound and Down came out on DVD a couple weeks ago, and having had a chance to peruse it, I feel obligated to say that it is without a doubt one of the best shows on television. Created by Adam McKay (Talladega Nights, The Other Guys), Jody Hill (The Foot Fist Way, Observe and Report) and David Gordon Green (Pineapple Express), the show boasts an inordinate amount of fresh, young comedic talent, and with the second season they take the show to new heights, allowing the characters and plots to develop far more than you ever thought they could. They elevate the typical raunchy TV comedy by adding pathos, and when it comes to a head in the second season, all you can do is sit back and be amazed.

The first season is a mere six episodes, demonstrating the fall of a legend. Kenny Powers had a moment in the spotlight when he won a big baseball game, but afterwards he turned to the twin vices of egotism and steroids. They led him down a spiral of self-destruction until he was kicked out of the majors and forced to get a job at his old high school.

This is the point where Kenny Powers becomes truly pathetic. He reunites with an old friend, Stevie Janowski, who becomes his self-appointed sidekick, only to constantly wear him down and emasculate him. He becomes a teacher, and yells at the kids, shouting obscenities left and right. If Danny McBride weren’t so hilarious, we would hate this character, and I’m sure there are many people who have turned Eastbound and Down off after 5 minutes for this very reason.

But he is offered a gig playing baseball again, and he knows that he has deserved it (so his ego dictates). When it turns out that he is being had, Kenny Powers steals his friend’s credit card and flees to Mexico in shame.  In the second season we find him almost unrecognizable – sporting a new hairstyle (corn rows), hanging out with an Indian midget gangster, and becoming an expert cockfighter.

Stevie tracks him down to Mexico, following the trail of credit card transactions, and as he relives those experiences, he slowly becomes more like Kenny, who alternately is living under the name on his credit card, Stevie Janowski. Already at this point, the series has entered into a whole new ballpark, playing with art-house themes of identity and performance. But it doesn’t end there. Kenny Powers becomes the new pitcher for the local baseball team, after much persuasion, and jumps back to being a egotistic jerk.

But when he has to figure out what it is that he wants out of baseball, out of his friendship with Stevie, and 0ut of his role in the Mexican underground, this is when the show becomes insanely, unbelievably good. Living in Mexico is another way of running away from his dreams, even if he pretends that it isn’t. He can’t deal with not having the support of those he loves, even though they would support him regardless. We, and he, both begin to see that the facade he has built around himself, the role that he plays is simply a way of preventing any harm from coming to him.

Kenny Powers rediscovers his love for baseball. He rediscovers the things that pushed him towards excellence when he was younger, and it was being in a foreign country that did it to him. He had to learn to walk again before he could even think about flying. And when he finally makes his journey home, one step closer to the goal set at the beginning of the series (to return to the majors), he discovers something that will turn his world on its end.

Kenny Powers, according to Danny McBride and co., has another year left on television. One season, and he hasn’t made it back to the majors. My money is on Kenny Powers changing so much as a character that going to the majors no longer becomes the thing that drives him. I sense a great redemption coming in the third and final season of this show, and you would be well advised to catch up, so you don’t miss it. Kenny Powers, once despicable, repulsive, washed-up baseball player, may just become a certain kind of character – one that we can look up to as proof that we are all capable of finding that redemption. Proof that we can achieve our goals with enough determination. And most importantly that at our worst, we are not lost.

Like Loading...
This entry was posted in Reviews and tagged Danny McBride, Eastbound and Down, Reviews, TV. Bookmark the permalink.

One response to “Eastbound and Down – Offensive, vulgar, yet touching.”