The New Generation of Comedy Filmmakers

Comedic auteurs are few and far between, or they were, until recently. The last decade has offered up so much fresh talent, as alluded to in my recent review of the second season of Eastbound and Down, that we seem to be in a veritable age of comedy. Somewhere between Judd Apatow’s ubiquitous productions, and Adam McKay’s strange blend of raunch and politics, for the first time in recent memory funny movies are becoming quite good.

In the silent era, the titans of Buster Keaton and Charles Chaplin led many down the path of artistic comedy, but since then there have been only pockets of greatness, and within those, very few who come close to the level of their predecessors. Perhaps Jacques Tati, whose resurrected script formed the basis of last year’s The Illusionist, can lay claim to being on par with those kings of silent comedy; and don’t get me wrong, I love Harold Ramis (Groundhog Day, Caddyshack), Ivan Reitman (Ghostbusters) and Carl Reiner (The Jerk). But even they seem to rely on a bygone niche, and most of them have been all but forgotten; comedy films have overall tended to be limited in scope and ability.

But this band of directors has transcended its own niche to become household names. What follows is a list of the best comedy talent out there, and some of their best works.

Judd Apatow (Funny People, The 40-Year Old Virgin)
The great puppetmaster himself, Judd Apatow has produced far more movies than he has written or directed, but in so doing he has engendered an entirely new kind of comedy. Of his directorial efforts, The 40-Year Old Virgin  and Funny People are his best, and yet they remain completely misunderstood. Both are very nearly art films with comedians, and they plumb the depths of the human heart. Virgin asks about the meaning of sex in a sex filled world, while Funny People points out the simple fact that all comedy comes from great pain and dissatisfaction. Even Knocked Up, which I find to be a very flawed film, succeeds because it is about Apatow becoming a father, and the ways in which that changes one.

Adam McKay (Anchorman, Talladega Nights, The Other Guys)
The Truffaut to Apatow’s Godard, the Clapton to his Hendrix, McKay began as one of Apatow’s many “found talents,” but has long since surpassed that designation. With Talladega Nights he crafted as gut-busting comedy that resonates with Faulkner and O’Connor, surprisingly enough. He also originated the technique of seamlessly including ad-libbed scenes (such as the Baby Jesus prayer from Talladega Nights), without them appearing unscripted. Because of this innovative technique, he actually had enough leftover footage to create an entirely separate movie from the outtakes of Anchorman titled Wake Up, Ron Burgundy! His other titles include the funny but weaker Step Brothers and the funniest movie of 2010,  The Other Guys (which was itself a not-so-subtle attack on big corporations in the wake of the bailout).

David Gordon Green (Pineapple Express, Your Highness)
The only member on this list to have a film in the prestigious Criterion Collection, Green has only directed two films with Apatow & co., though his career began years before. His George Washington is a profound art-house number, and he ran through a few of those before jumping ship. The most fascinating thing about his two additions (Pineapple Express and Your Highness) is that what they lack in sheer laughs they make up for in filmmaking finesse. Both of his films are strangely absurd in a way unlike any of his contemporaries, but he crafts real characters and honest relationships. Even Your Highness, which wasn’t hugely funny, was a good fantasy film in the tradition of countless 80’s movies.

Greg Mottola (Superbad, Adventureland, Paul)
He began in the mid-nineties with a movie entitled The Daytrippers, but then followed Apatow through both of his TV shows, Freaks & Geeks and Undeclared. When he returned to the filmmaking scene in 2007, he dropped in quick succession three titles – Superbad, Adventureland, and this year’s Paul. All three have one thing in common, a certain sensitivity and nostalgia that makes you believe Mottola knew, or perhaps was, one of these characters. Even the humor in Superbad, which seems to me the coarsest of the lot, comes off as affectionate and adorable through Mottola’s lens (best seen in Adventureland). 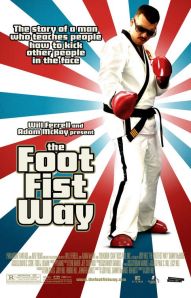 Jody Hill (The Foot Fist Way, Observe and Report, Eastbound and Down)
Adam McKay and Will Ferrell presented a homemade debut feature in 2007, introducing two new faces simultaneously: Jody Hill and Danny McBride. The Foot Fist Way followed the trials of a Taekwondo instructor who suffered from misplaced self-aggrandizement originating from an intense insecurity. After the success of that film, Hill returned with Observe & Report, whose main character was aptly compared to Travis Bickle. Hill has this strange ability to give us characters that we really should hate, not out of anything they have actually done, but because the represent everything we loathe about ourselves. They are awkward and uncomfortable, and we don’t like being around them, but he finds a way to humanize them and bring out their deeper virtues; or if they are found to be lacking, to point out that their faults are no different than ours. Jody Hill is a talent to watch, especially after his success with Eastbound and Down.

Edgar Wright (Shaun of the Dead, Hot Fuzz, Scott Pilgrim vs. The World)
This director is not associated with any of the aforementioned filmmakers, all of whom work together. Wright has made three films and a television series, and each one has been made with the technical wizardry of the wunderkind that he is, and the sort of tongue-in-cheek haphazard references that can be found in the work of Quentin Tarantino. Shaun of the Dead simultaneously lampooned the entire zombie genre and was immediately included in its number. Hot Fuzz was a buddy cop movie that did much the same thing, if with a little less grace. His most recent film, Scott Pilgrim vs. The World, was his first without the dynamic duo of Nick Frost and Simon Pegg, but it may be his best film to date as well. It’s sensational, with seemingly effortless and mindblowing special effects, a complete sense of self, and a tone befitting its resemblance to a videogame.  I am personally on board for anything else Wright brings to the table.

Jason Reitman (Juno, Thank You For Smoking, Up in the Air)
Son of Ivan Reitman, Jason has demonstrated an ability to make films that are character driven, morally uncertain, and yet still manage to be both critical and commercial successes. His last was Up in the Air, and was passed over for several awards that would have been well-deserved, as it was a film for our times. Before that he did Juno, which is far from perfect, but still endearing, and Thank You For Smoking, which still manages to be the most insightful comedy produced by this generation. Its main character is a lobbyist for Big Tobacco who has to confront the moral ramifications of raising a child and supporting something that kills more people than guns and alcohol combined each year.

There are a few others who have made it into the spotlight, but have yet to produce enough work to be included on this list. Paul Feig created the Freaks & Geeks series and directed this year’s funniest movie, Bridesmaids, but has done little else. Miguel Arteta was the man behind Youth in Revolt, which I adored, and Cedar Rapids, which left a little to be desired, so he might have a place in the future with his next couple films. Who would you have included in this list, that I may have forgotten?