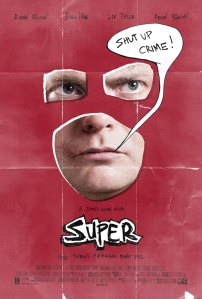 Kick-Ass brought us the first self-aware skewering of the superhero genre, but it won’t be the last.  James Gunn, director of the horror comedy Slither, returns with Super – which looks to be a pastiche of violence, dark comedy, and Adam West Batman comic graphics.

The trailer for Super has just been released, featuring Rainn Wilson (Dwight from The Office) Ellen Page (Juno), and Kevin Bacon.  The film comes out April 1, 2011.

Any film that features a pipe-wrench wielding superhero screaming, “Shut up crime!” is the type of absurdist hilarity I can get behind.

Like Loading...
This entry was posted in News and tagged James Gunn, Kick Ass, Slither, Super, Superhero. Bookmark the permalink.