White collar workers feel the pain in “The Company Men” 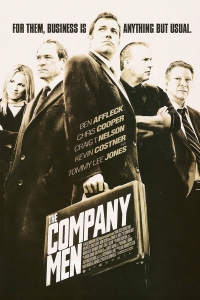 A cadre of white collar workers making at least $160,000 a year lose their jobs to corporate downsizing to inflate the company’s stock price.  As the wealth disparity continues to divide the U.S. into binary classes (super rich or flat poor), a film that expects audiences to empathize with such characters should sink faster than a lead zeppelin.  Yet the film is able to dodge this pitfall to yield a decent drama.

Bobby Walker (Ben Affleck) is a corporate salesman who is blindsided by his dismissal from GTX, along with Phil Woodward (Chris Cooper) and many of their colleagues.  The men deal with their “downsizing” in different ways, which affect their families as much as themselves.

It was a deft move for the casting director to bring in Kevin Costner, Tommy Lee Jones, Ben Affleck and Chris Cooper to portray this tale of economic woe. These men already have a familiar presence to audiences, which establishes stronger bonds with their narratives.  Which is important due to the aforementioned issues of connectivity to folks making triple digit salaries during the current recession.

Even though these men lose cushy, high-paying jobs, you can’t help identifying with their quest for new employment. Just last year it took me three months to find a decent job.  Some positions I was applying for had “hundreds” of applicants for even menial positions.  Employment is also deeply rooted to masculine identity, since our bonds to other areas in the community are not normally as strong as our female counterparts.  It therefore becomes less about the luxuries the money provides and more about just having a job, even better if it’s something you enjoy – who can’t identify with wanting that?

There is also an element of identifying with who we want to become.  When a wide shot takes in Affleck’s home, he’s got a two car garage and a two-story house that’s wider than it is tall.  As I pointed out in my horror essay last year, when films showcase middle class characters within their middle class luxuries, they earn our allegiance because they epitomize the American Dream: Enough money to be secure from poverty and all the baggage that comes with it (race, ghettos, generic food, etc.).  Even if I felt mild estrangement because of the largess these men have – I would wager most people didn’t have that problem due to this allegiance to the middle class ideal.

The Company Men is a far cry from the ultimate commentary on the U.S. recession’s effect on the population, as there still hasn’t been a film tackling the blue collar experience – which would be more jarring and depressing.  Thus far Up in the Air is about as close as we’ve gotten.

There are also several moments of awkward scene placement which will feel like you’re watching a child hammering the cylinder into the square hole.  Also, Ben Affleck’s character seems to be the last one to figure out that he’s got to sacrifice his stubborn pride for the good of others, which is his ultimate failure as a husband and a father. His recalcitrance gets aggravating quickly (even if some of it feels realistic).

Tone and narrative issues aside, The Company Men is an okay drama that takes a very simple look at the importance of men and their work.  If you like the cast you’ll probably like the film.

Like Loading...
This entry was posted in Reviews and tagged Ben Affleck, Class, The Company Men. Bookmark the permalink.