Vampire Rumble: Let the Right One In vs Let Me In 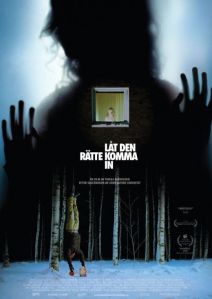 As soon as a re-make of Let the Right One In was announced, film fans around the world let out a collective internet groan.  It’s not as if this sentiment is without merit considering the crop of 80’s horror classics that are in the works of being re-made (Fright Night, The Monster Squad), as well as the way foreign films are treated by the Hollywood re-make machine (Eddie Izzard’s commentary on re-makes seem apt [begins at the 1:03 mark].  So just how did Let Me In, the U.S. re-make of Let the Right One In, compare to the original?

My wife pointed out that there is a difference between re-making a story and re-telling a story, as we’re always re-telling similar tales with different window dressings.  Michael Haneke’s Funny Games is a clear example of a re-make: it was first made in 1997  (Austria) and re-made, shot-for-shot, by Haneke in 2007 (U.S.).  Alternatively, something like John Carpenter’s The Thing is a re-telling of The Thing From Another World, which itself was based on the short story Who Goes There? by John W. Campbell.  Let Me In is an example of the latter re-telling, not a mere re-make.  The re-telling of Let the Right One In by U.S. director Matt Reeves prompts an interesting analysis of what each of the filmmakers found most striking about this vampire tale.

For instance, there is a scene in both films in which Eli/Abby’s older male caretaker Håkan/The Father*  requests that Eli/Abby doesn’t see Oscar/Owen again and Eli/Abby puts her hand to his face.  In Let the Right One In this scene takes place between shifting close ups on each character and the moment goes by pretty quickly; in Let Me In director Matt Reeves chooses to frame Abby and The Father in a medium wide shot so we can see the two characters interact within the kitchen setting.  This scene also plays out in longer emotional beats, as “The Father” reacts to Abby’s affection in a way that conveys their relationship with greater impact. Likewise, Let Me In draws out The Father’s death for emotional resonance, in contrast to its abruptness in Let the Right One In.

A similar difference occurs during the climax of each film, when Oskar/Owen walks away from the killing of the neighbor/police officer.  As in the kitchen scene, when Oskar goes to close the door and flee the scene of bloodshed, it happens quickly, this time in a wider shot.  In Let Me In, however, alternating close up shots reveal that the police officer is alive as Abby feeds and looks to Owen for help.  Let Me In again draws out the emotional relevance as the police officer silently reaches his hand out to Owen, only to have the boy slowly grasp the door knob and close it behind him.

Other shifts of focus: Let Me In is focused on Owen’s guilt as he tries to suss out what is true evil, a dilemma complicated by the fact that this girl he likes goes around killing people.  Abby herself seems non-plussed about the situation. In contrast, Let the Right One In showcases Eli’s intense guilt over killing to live, which is juxtaposed to Oskar’s willingness to lash out in vengeance against his bullies.

Which leads to one of the most dramatic differences between the two films: Both showcase their male leads standing up to their respective bullies by whacking them with a stick.  However, when Oskar smites his enemy, he visibly relishes the power to inflict such pain, whereas Owen is horrified by it.  This taps into the guilt previously highlighted in Let Me In, and also into the wider themes of the U.S. grappling with notions of good and evil (mentioned in my review here).

Lina Leandersson as Eli in Let the Right One In

Holistically measured, most might agree that Let the Right One In is a superior film.  Lina Leandersson did a superb job conveying Eli’s trepidation over killing others to survive and befriending young Oskar (Chloe Moretz in Let Me In came off stale). And Tomas Alfredson’s shot choices are varied and engaging (Reeves is no slouch, but still can’t keep up).  Despite such praise, the original still has some warts: the music calls attention to its cinematic artifice and the CGI cats are almost as bad as the CGI moments in Let Me In.

Even if we’re going to give the Best Picture award to Let the Right One In, Let Me In is a damn fine re-telling of an already great story.  Reeves and co. were not interested in merely changing the language and doing a shot-for-shot re-make, they were out to make this a film that would feel relevant to American audiences: Reagan giving a speech about true evil and American goodness, an image of Jesus looking down on Owen as he steals money, Owen’s wall covered by a blown up photo of the Earth from the moon (compared to the forest on Oskar’s wall), a shop worker decked out like Boy George, 80’s music scattered about; these are all things that define a generation of Americans, and as a part of our history, are a part of all U.S. citizens past, present, and future.  Both films are great, but they have different things to say based on their cultures (Let the Right One In includes its own doses of culture chimes, with remarks about “the Russians” and a news cast that mentions Russian president Brezhnev).

Some things are absent from one film that are in the other (a particularly amazing shot inside a car accident earns points for Let Me In); some scenes are handled differently, while others the same.  The point is, there’s enough going on in each film that they succeed in ways that make them unique and equally watchable.  Let the Right One In may be better, but kudos to Reeves for making Let Me In stand out from an already great predecessor rather than face-planting like most expected – this writer included.

Like Loading...
This entry was posted in Articles, Filmmaking, News and tagged bully, eddie izzard, funny games, Horror, let me in, Let the Right One In, Matt Reeves, Sweden, The Thing, the thing from another world, U.S., Vampire, who goes there. Bookmark the permalink.

One response to “Vampire Rumble: Let the Right One In vs Let Me In”