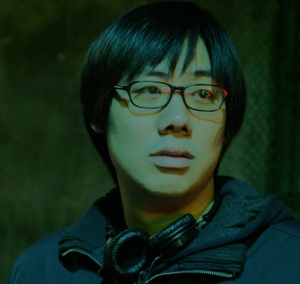 After seeing the delightful Au Revoir Taipei at the Edinburgh Film Fest, I had a chance to sit down and talk to the director about romantic comedies, French New Wave influences, and challenges as a writer.

You have made some short films, but Au Revoir Taipei is your first feature length film.  Could you talk about some of the challenges of making that jump?

Shooting it is actually not a challenge.  That’s kind of one of the weirdest things about it: the shooting is just more days, but you don’t feel as daunted by it.  Even when you shoot a short film you do a couple of scenes a day and that’s just extended over a period of time.

The script writing process was really difficult.  That was where it was a whole new thing, to go from a ten page script to a hundred page script.  It’s not ten times harder, it’s like a hundred times harder [laughs].

Because you wrote and directed Au Revoir Taipei as well.

Structurally it’s so different.  That was one of the toughest things for me, was going from a ten minute script to a ninety minute script.

Did you get advice or help from friends, bouncing  ideas off, or…

Writing is one of those things where it’s also extremely difficult to, like no matter what, no one can help you because at the end of the day it’s still you and your laptop.

So even shooting at night, I assume in the streets of Taipei, that wasn’t too difficult?

Film production is always inherently…  The challenges are always the same: not enough time, you don’t have the money for something, your actors aren’t working out today, or the weather isn’t perfect.  I think those are always filmmaking problems.

In general shooting in Taipei was great.  At first we thought it would be a real pain in the ass to do all-nighters every night.  So we would go to sleep at 8am, get up at like 2 or 3 in the afternoon, go to set, but it became really nice actually.  The only people in the whole city who had this weird sleep routine were us.  So every night by 2am the city was dead and it’s just us shooting till daylight.  It was actually really nice, to feel like this was our city

How did you light these sets then?  Did you use a lot of natural light?

We used a lot of natural light, street lights and stuff, and we did a wet down, which means we put water every night on the streets so you get a kick from lights reflecting off the water.  But for the bigger stuff like the dance sequence, there’s just not enough light, so we had to light those heavily.

And bring in a crane.

And you probably hadn’t been able to do that in your short films up until that point.

With your first short films, were those more on your own or did you have the same type of support?

I had really good crews, especially my short film before this feature, just smaller scale.  We didn’t have as much equipment, they didn’t have as much crew, but I think what’s great about filmmaking is you can always find really nice people to help you.

France is an obvious influence in Au Revoir Taipei, with the music and even some of the comedy, I can’t pinpoint it, but it felt French.  Could you talk about your influences?

Well, French New Wave was a big one.

When I was listening to the score it reminded me of Breathless.

It was less of an influence and more of an homage.  The idea was to make a movie about a Taiwanese kitchen where Taipei becomes a mutated version of Paris.  Dance-y, gangsters, falling in love, so that was very intentional.  “We’re going to make a French New Wave, Parisian, vision of Taipei.”  But I think a lot of the stuff that I watched that are less obvious or that are influences, are a lot of Wes Anderson, early Wes Anderson, like Bottle Rocket, and a lot of American musicals from the 1950’s.  It’s probably less of an homage and more of just me ripping off [those films].

And Woody Allen films, too.  Early Woody Allen, during his slap-stick phase.

Because there’s a lot of subtle comedy in Au Revoir Taipei that isn’t a series of jokes, some of it is visual gags, and I think you can definitely see some of that Wes Anderson.

Wes Anderson is so good at dry humor and dry visual humor, so we were trying to figure out a way to get some of that, but not make it so overly Wes Anderson, where it’s a storybook world.  Find funny visual gags, deadpan line deliveries, stuff like that.

Was your cast aware of all these influences, because it seems like they are really on board with what’s going on in the film.

For the most part, no.  For the most part they hadn’t seen a lot of the movies that maybe me, the director of photography, the production designer, were influenced by.  The only exception was the guy that played Hong [Lawrence Ko] , the orange gangster, because of all the actors, he’s the most experienced, so it was okay for me to be more direct with him and show him movies that I thought – “Look at the comedic timing and performance style of this actor and think about it and think about what you can take from that.”  So I showed him Owen Wilson’s character from Bottle Rocket and this Korean movie, Memories of Murder.

Have you seen that?

So I showed him those dumb cops and I was like, you just look at these assholes and how funny, how stupid they are, and yet you believe them.

And it doesn’t take away from the story either.

It doesn’t, yeah.  So I showed him stuff like that to get him to think about how he can create a character that has these mannerisms or the psychology of someone who wants to be a bad guy, but is ill-equipped to be a bad guy.  He was the only actor where I specifically showed him some of the movies that influenced me.  For the other actors, a lot of them are non-professionals and have never acted before, so I didn’t want to show-

That’s actually impressive with what I saw on screen.

Gao looks really familiar, but I can’t pinpoint it.  I thought I had seen him somewhere else.

Well this is his first film and he’s not an actor.  It’s weird, we had a theatrical release in Taiwan, it’s been in different places in Europe, the States, Asia.  The one consistent character that everyone gets is Gao.  Some people don’t like certain characters or like certain characters, but Gao, everyone gets him.  Sometimes people laugh at your jokes or don’t laugh at jokes, depending on different audiences, but Gao consistently gets the same laughs at the same places.  I don’t know, maybe it’s something about that guy that is more universal.

I guess it’s the simplicity of the character.

Even the fact that he likes the girl, it’s still deadpan.  There’s not the drive of Kai, the over zealousness of the main character.  Maybe in some ways we identify with how zen Gao is.  Kind of like The Dude in some ways.

I watched a lot of  early Coen Brothers, too.  Raising Arizona, stuff like that.

You were able to achieve a legitimate feeling of sweetness and romance that I don’t think I’ve seen in a Hollywood film in a while.  They crank out all these romantic comedies and I wish this one [Au Revoir Taipei] could define that genre.  How did you flesh this out in the writing process?

It’s weird, in a way maybe it’s because it’s so light.  That can be a complaint about it, too.  I think because we’re not trying to  –  there’s no kissing, or embracing, it’s just subtle lightness.  Dancing is in the place of other types of affection.  So I think that’s part of it.  The other thing it’s about a lot of unspoken things, glances….

When they are walking together and Gao runs off and there’s that awkward tension, that’s everybody’s first crush or first date.  So you’re definitely tapping into that without saying anything.

Yeah, I think I like awkwardness [laughs].  So a lot of it is just awkwardness, which is funny to me.  The other thing I think works about it is it’s not a pure romance just like it’s not a pure comedy.  You have two worlds: one is a bunch of idiot bad guys and then you have some silly kids trying to fall in love.  So I think in a weird conceptual way, maybe it helps that you have this balance between absurd slapstick and sweet romance.

I think that it definitely works.  When you’re seeing so many festival films, and that’s a lot of dramas, your film doesn’t come off saccharine.  Even though you said it was light, there’s a time and a place for it, and I don’t think it comes out trite.

It’s a fine line.  If I over analyze and worry that I don’t – .  I just like light, non-spoken, kinds of romances.

-instead of using dialogue as a crutch.  So there’s much more being said with glances than there is with what they could say or any makeout scenes at the end of the movie.

It helps that we’re in a stylized world, too.  They can just dance and that can be enough.  Whereas if it was grounded in a very realistic world, then there’s no way you could get away with dancing as a way to connect them.

So do you have anything coming up?

I’m writing it now, I’m trying to make a movie in the 80’s in Asia.  It takes place during the economic boom in the 80’s, so it’s kind of like The Apartment.  Have you seen The Apartment, Billy Wilder film?

It’s with Shirley MacLaine and Jack Lemmon.  So it’s kind of like that, but also a romantic comedy, sounds weird, but set in the business world, which is also equally absurd.

I meant to come back around to this, but what is it like watching Au Revoir Taipei with these different audiences.  How is it received in Taiwan vs Edinburgh?

For the most part it’s super encouraging that the jokes, the humor, the romance that carries the film: no one doesn’t get it.  No one in Taiwan or in Europe, no one watching the movie ends up thinking it was different movie than what we made.  It’s easy to gauge because it’s a comedy, so people laugh in the same places.  That’s every encouraging.

For the next film, I’m not going to worry about that as much.  Because I really did worry about it: “Oh, is it arty?  Is it not arty?”  No one really cares.  I as a filmmaker can watch New Wave films and I can put whatever I want into those films and it doesn’t mean that the audience has to get it.  They don’t have to see that it’s French New Wave as long as the characters or story, are relevant.  You can make it whatever you want it to be as long as people identify with it.  You don’t have to worry about the labels.  I think that’s what’s really good about watching it with different audiences, to reassure that it doesn’t matter.  It doesn’t matter if it’s an audience in Scotland or an audience in Taiwan, the same things play.