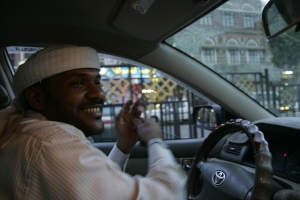 It has become a standard documentary trope to bring cultural clarity by focusing on an otherwise unknown subject (often poor, non-white, oppressed); we get to know these people personally and therefore break down cultural barriers .  What happens, then, when the character doesn’t even know himself? The Oath‘s analysis of Osama Bin Laden’s former bodyguard, Abu Jandal, is fascinating for, if nothing else, Jandal’s ability to deliver self-contradiction with such sincerity.

In an early scene he argues for the September 11th attacks, but then later says killing civilians instead of engaging the enemy on a proper battlefield is wrong. Even before these contradictions, you quickly realize you cannot trust this character.  He tells one of his taxi customers that the camera in the car is off (it isn’t) and goes at great lengths to explain it away.  You also can’t trust him because you can tell that he loves being in front of a camera.  Like Professor Slughorn or celebrity groupies, Jandal relishes being associated with the famous “Sheikh Osama” and the nineteen hijackers who carried out the September 11th attacks.  Yet he, who swore an oath to Osama Bin Laden, has not  brought “death to the infidels.”  In fact his brother-in-law Salim Hamdan, whom he recruited, is the one who has spent several years in Guantanamo for merely driving Bin Laden around.

Though title cards interrupt the film’s flow, this is an engrossing, fascinating documentary.  When you hear the reason for jihad (Americans bombing Arabs) it’s difficult not to think of the young American men who signed up for military service after September 11th.  The complexities of Abu Jandal leave room for much deliberation, and the information we receive about the treatment and court processing of Guantanamo Bay prisoners (torture, new laws created to get around Supreme Court decisions) is straight up depressing.

A brilliant touch was highlighting the interrogation techniques used on Abu Jandal after September 11th, techniques that yielded a treasure trove of information: they were nice to him.  FBI agent Ali Soufan did not waterboard Jandal or put him in stress positions, he befriended him.  With much patience, Soufan was able to get enough information that the War in Afghanistan was put on hold to appropriately use the intelligence.  This of course is in stark contrast to the way that future prisoners, including Jandal’s brother-in-law Salim Hamdan, would be treated (are we understanding yet that torture doesn’t work?).

If you don’t know anything about the last decade concerning Bin Laden, U.S. torture, Guantanamo Bay, motivation of terrorists, etc., this is a compact piece that touches on it all.  Even for those in the know, it’s still engaging.  The Oath is a must see if you’re going to talk foreign affairs at a party.

One response to ““The Oath” opens closed doors”