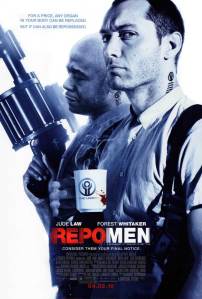 The trailers for Repo Men hinted at two possible paths for the film: interesting dystopian setting for an unmemorable action flick–or something more special.  I am glad to say it’s the latter.

Repo Men, as the title suggests, is about repo man Remy (Jude Law), who reclaims organs from customers who have fallen behind on their payments for artificial livers, spleens, hearts, etc.  Victims (or “clients”) are tased, read their rights while unconscious, and then Remy goes to work collecting.

I reviewed the dystopian vampire flick Daybreakers earlier this year and one of the things that impressed me was its ability to be entertaining and have something to say.  Some of these sci-fi action films have wafer thin characters/story to leave more room for explosions and sexiness (insert obligatory Michael Bay diss here). At first, thats what you expect from Repo Men: impromptu surgeries, fighting, etc.  And I may be the only one, but I often find Jude Law insufferable.  However:

This film punched my expectations in the balls.

The film does a decent job of building up the blue collar Remy: we see him struggle with his occupation at home when his wife pressures him to get out of the slicing and dicing game.  There’s more time spent tying Remy to his family then most action fairs and it helps paint a believable portrait of this working guy. 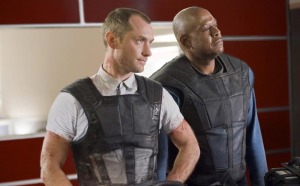 On the other hand, we have Remy’s partner, Jake, played by Forest Whitaker.  Remy is Jake’s only family; the two men served together in what appears to be Gulf War II before becoming repo men.  So when Remy’s wife wins the battle for his occupation change, Jake doesn’t take it so well. Whitaker is always someone to watch (see Ghost Dog or his time on The Shield) and he brings legitimacy to Jake’s fear of abandonment.

Finally, the violence.  It’s both awesome and cringe worthy.  I’m the type of guy who can watch Hostel with no problem, but show me some surgery on TLC and I’m quivering.  One is real, the other isn’t, but in Repo Men both realities collide when Remy is slicing open chest cavities and patching up recently replaced knee caps.  :shudder:

One fight scene will immediately remind one of the infamous hallway fight from Oldboy (though it’s not as awesome) and might make you wonder whose side you’re on as our hero brutally kills goon after goon with 300 type flourish and enthusiasm.  Topping off the violence roundup is a scene that fans of Cronenberg’s Crash will enjoy.  You won’t really know if you’re revolted or turned on.

Ultimately, the reason I recommend Repo Men so highly is its wonderful conclusion.  With so many big budget films that repeat the same plot points you can see from miles away (there are at least one or two in Repo Men), I was actually surprised by Repo Men‘s ending, and satisfied with it.  After putting up with so many bad endings to various sci-fi stories (Battlestar Galactica, I Am Legend [the film], Y: The Last Man, Marvel’s Civil War), a film that can surprise and satisfy you with a conclusion that doesn’t resort to Lost-like wankery is something to behold.

*for more on the film’s conclusion, look at my posting in the comments section