Daybreakers: I Am Legend II, Even Lengendarier (I mean that in a good way) 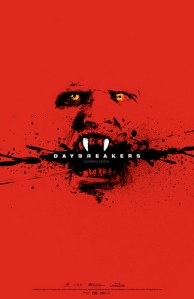 When my friend Jesse and I saw the initial ads for Daybreakers, he commented, “This looks like a sequel to I Am Legend [the book, not the movie].”  There are plenty of reasons for this:  I Am Legend left us with a world of vampire-like beings and a minority of humans–and that’s where Daybreakers picks up.  Society has adapted to serve the needs of the new vampire majority, as cars warn drivers of UV light, coffee/blood stands are in the subways, humans are “farmed” for their blood, and there is even a vampire army.

However, the human blood supply is dwindling, and blood supplier Bromley Marks is desperately seeking a blood substitute; for without blood, the professional, slick-looking vampires decay into human-bat monsters.  Edward Dalton (Ethan Hawke) is trying to find an alternative, as he’s a vampire vegan (won’t drink the blood of humans) and hopes of ending human farming.  After helping some humans evade capture by his vampire brethren, he is contacted to help a band of humans spread the word about a cure for vampirism.

Daybreakers is certainly not the best written or acted film, but it does an average job in these areas to direct focus toward the bigger point, the story. We see a whole world of vampires and the little details are what sell it: news reports detail forest fires caused by vampire animals running out in daylight, constructed tunnels allow citizens to get around the city in the day, street signs warn of children crossing between 2am-3am, and the equivalent of an air raid siren sounds to warn of approaching sunrise.  This may not be a gritty, Children of Men, type realism, but it’s one of the best I’ve seen.*

The major feat for this film, however, is that it actually adds something to the vampire mythos.  We learn that the cure for vampirism is a vaccination (of sorts) through small doses of sunlight.  This is pretty clever, given that humans develop immunities (are cured) via an injection of some of the very material that would normally kill them (equivalent of sunlight killing vampires).  The film even goes further, revealing that vampires-turned-human pass on the vaccination when fed upon, thereby turning more vampires human (just like immunities passed onto children by their mothers). Though this is very basic science, it’s a brilliant idea.

It’s also worth noting that the filmmakers, Michael and Peter Spierig, have cleverly combined two images of vampirism: Flush with blood, vampires look professional, suave, and upper class, the American version of the classic aristocratic vampires. When famished, however, they become ugly, deformed bat-people.  These divisions add balance to the film, especially when the regular vampires, beginning to show signs of blood starvation, witness their monstrous brethren “taken care of” by being chained and dragged into sunlight.** 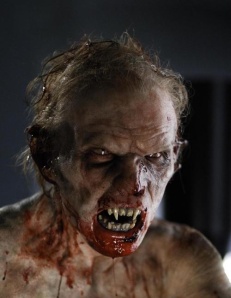 And of course, what of the special effects?  Minimal CGI and lots of practical effects make the man-bat creatures truly horrifying, with huge wings, faces that make you shudder, and joints that should not exist in nature (one looked like he had a second shoulder somehow).  There are TONS of blood, to the point that I’m sure the directors were pushing for a laugh as a vampire EXPLODES BLOOD ALL OVER THE ROOM.  Some of it is ridiculous, but it felt like it was done out of fun, not to the point of getting out of hand and taking you out of the story.

Though in the film they do not explain how vampirism began, there was a viral clip released that shows us “Patient Zero.”  The picture is of Severen, a crazy vampire (played bya scene-stealing Bill Paxton) from the cult-vampire film, Near Dark (1987). This little send up is apt, as Daybreakers is a good old fashioned, R rated 80’s vampire movie, with tons of practical effects, an interesting story, and pieces of humor thrown in for good measure.  With the exception of the tacked on ending (there are easily 2-3 better ways it could have ended) and a rather large plot hole,*** this was a good film to spend your Monopoly money recession dollars on.

*Like Children of Men, the story’s tale of “dwindling supplies” lends itself to several allusions to societal concerns: oil, homelessness, criminals (a human-bat breaks into Dalton’s home for drugs blood), etc.  But they don’t club you with it; you find it if you’re willing to look.

***if you are farming humans, you should have them mating to make more, and you wouldn’t be draining them completely, but taking a pint and coming back next week; this should be an infinite resource so long as you’ve taken some notes from The Matrix

4 responses to “Daybreakers: I Am Legend II, Even Lengendarier (I mean that in a good way)”