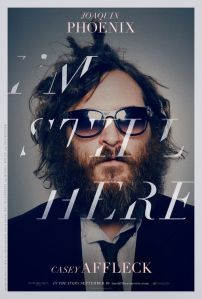 If you are here to read a strict review of the “Joaquin Phoenix documentary” you’ll have to go somewhere else.  The film is operating on levels reminiscent of  The Brothers Bloom because you have no idea how to differentiate between reality and performance, and are left bereft of any concrete narrative to critique.

However, if you’re here searching for thoughts about the film, step right into my office.

My initial impression was that Phoenix was proclaiming his self-importance with the title I’m Still Here, a defiant cry to some crowd that, “You can’t hold me!  I’m still here (bitches)!”  This was supplanted by an interpretation more along lines of, “Uh…why are you talking about me like that?  I’m still here.”  At the film’s heart are the ways Phoenix sets himself up for the type of criticism he receives, and how much is fueled by celebrity culture.

First and foremost, Phoenix appears to have serious issues.  I mean this not at all in a judgmental fashion, just as an interpretation of what appears on-screen.  Phoenix performs a giddy jig at the prospect of a line of coke and two prostitutes; the way he speaks suggests one too many shots of rum; and the way he reacts to other people, in word and deed, does not suggest a sound mind.  Silence follows him at the film’s end, but the rest of the time we see him as a crazed hobo crying, yelling, and consuming various substances. END_OF_DOCUMENT_TOKEN_TO_BE_REPLACED