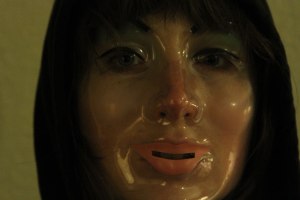 When I tell people I’m into watching and making horror films, some try to shrivel into themselves like a turtle – with others, you practically hear the eyes rolling in their heads.  They seem to chalk the entire genre up to consisting merely of the ghoulish or the cheap trick, whereas, I’ve found the horror genre to be fertile ground for exploring human tragedies (The Descent) or tinkering with our own mythologies (zombies, vampires, etc.).

Horror films to me aren’t scary; there remains a distance.  It’s always a guy in a rubber mask, the knife is fake, and the dark is nothing to be afraid of.  There are always cinematic artifices that maintain the boundaries between reality and fiction: a film’s score, the editing, or the spectacle of special effects.  Even as a child I don’t know if I’ve ever been truly disturbed, unsettled at my core, by a horror film

V/H/S utilizes the language of the found footage film to sell its horrors (first person point-of-view, handheld camera work, long takes), but its major departure from the found footage genre, which disposes of the cinematic mediator and invites us into a new realm of horror, is the film’s adherence to consumer-level visual technology.  Even The Blair Witch Project, the now dethroned king of the found footage title, was shot on 16mm, which is easily converted to the 35mm standard of Hollywood.  With V/H/S on the other hand, the sheen of traditional cinema is gone as we witness the grainy footage of the homemade.  From Skype calls to a honeymoon video on a small camcorder, the visual aesthetic makes it more domestic and personally invasive than horror plots featuring a killer in your own neighborhood.

What maintains that illusion is the cast.  Even as a big fan of Cloverfield,  I’ll admit that the cast from that found footage flick is entirely made up of people you’d only see on tv or magazine covers.  Not only do the uncannily attractive actors of Cloverfield work against the “this is real life!” conceit, but their weaknesses as actors belie the premise.

V/H/S is a complete reversal of that dynamic.  The cast members appear as “normal” people, and their ability to convey non-acting, just the mundane, is what sells the film as such a harrowing experience.  It’s a tall order to just “act normal” but their success is directly proportional to how freaked out I was afterwards.

On my walk home from the screening I was in a daze.  Everything I thought I knew about myself, my love of horror, the genre itself, was demolished.  And for the first time, I experienced the world like those who casually view horror films do: I was afraid.  Walking under a shadowy bridge put my senses on edge and as I approached a curb with an open gutter set into it, I was seeing it as an opaque void enveloping any number of horrors that could reach out and grab me as I passed by.  I leaped the curb just in case.

Most horror films operate by having a series of mediators: the director and editor guide points of focus and the actors serve as our emotional proxy through the whole ordeal.  Normally, we’re never directly affronted by the world of horrors; instead, our proxies absorb the killing blows (emotional and physical alike).  But as V/H/S proceeds through each segment, we are unrelentingly terrorized as the primary target.  We’re the star of our own snuff film.

It’s that last part that has me puzzled.  The film has a strong feminist thread that indicates its orchestration, but otherwise you can’t rate, recommend, or critique this in traditional “film” terms.  You’re not rating a film, you’re rating an emotional experience.  V/H/S is so good at being pure, unfiltered horror, that seeing it again would be like choosing to re-live the worst nightmare you’ve ever awoken from: It wasn’t real – but it felt too real to ever want to go back.