Rise of the Planet of the Apes: No War but Class War

Caesar, though a hyper-intelligent chimpanzee, is still just an animal to human society.  When Will takes Caesar out to the park he still requires a collar and a leash.  Will tells Caesar’s he’s not a pet while all the evidence says otherwise.   Society’s inability to cope with a creature stranded between two worlds lands him in ape jail, a sanctuary for various apes run by less than kind employees (when a hose is used to pacify Caesar, Civil Rights demonstrations aren’t far from mind).

Caged with chimps bereft of gene therapy, Caesar is just as distressed as he was in the human world.  Over time, Caesar befriends circus orangutan Maurice, who also knows how to communicate via sign language.  Able to communicate intelligently with at least another ape, Caesar’s time in jail forges bonds and fashions an identity beyond that of a pet.  Hence, when Will finally arranges to bust Caesar out, the enlightened chimp spurns Will.  Will may come with love in his heart, but he’s carrying a leash that comes to symbolize Caesar’s slavery.  The choice is clear: you can leave your people for the creature comforts of bourgeois culture, but you’ll never be free so long as you’re the system’s pet.  When Maurice warns Caesar to be careful around the ape sanctuary safe because “they don’t like smart apes,” the message is also clear: a pissed off, intelligent group of disaffected, forgotten, abused, lower members of society is a danger to the rulers. 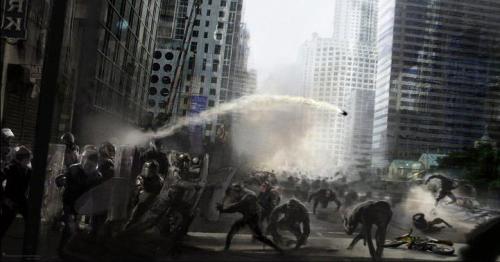 Caesar’s turnaround mirrors Malcolm X’s enlightenment while imprisoned, and both Caesar and X go about trying to educate their disaffected people to kickstart the revolution (though Malcolm X didn’t have the luck of having a magic brain therapy drug to bolster his cause).  When the ape revolution storms through San Francisco, frees its brethren from the Gen Sys labs, and triumphs over the weapons of the state (police officers on horseback and brandishing firearms), the political subtext leaves you hungry for a showdown with our own wealthy overlords.

Like Loading...
This entry was posted in Articles and tagged allegory, Civil Rights, Class, class warfare, Malcolm X, Rise of the Planet of the Apes, subtext. Bookmark the permalink.

5 responses to “Rise of the Planet of the Apes: No War but Class War”