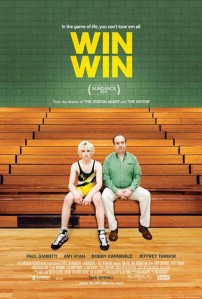 Judd Apatow’s last film Funny People was unjustly criticized for being a drama that happened to be funny, which is what you’ll get with Win Win.

Paul Giamatti stars as struggling father, law practice owner, and wrestling coach Mike Flaherty, whose life is punctuated by situations that prompt an exasperated, “Shit.” As he’s struggling to keep his practice afloat and the wrestling team from performing seppukku out of shame, things get shaken up by the arrival of Kyle, a wrestling whiz kid who has been set adrift by an unstable home life.

Wrestling plays a role in the film, but takes a back seat to the evolving dynamics between Kyle and his unofficial foster parents.  It’s a merry-go-round of intersecting relationships as Kyle gets to know his grandfather, Mike and his family figure out their new resident, and Mike’s role in some shady goings-on comes to light.  Props to screenwriter and director Thomas McCarthy, who cultivates these varied threads with a light touch, abetted by finding the humor between the drama.  Opening a film with a little girl muttering a curse is how all films should win their audience over.

Paul Giamatti, known since Sideways for being the angry smart schlub, is tempered by Mike’s everyman struggle to simply take care of his family and try not to do any harm along the way.  Though Kyle’s dialogue, delivered by Alex Shaffer, will cause some synapses to fry when he’s forced to speak for than a few lines, his clipped replies and indifferent demeanor speak to the resilience and disaffected nature of youth without coming off as parody.

Win Win is largely a drama, sprinkled with comedy and mixed with the best parts of the sports film genre.  Despite the film’s rush to a pat ending, it’s an intriguing analysis of the pressures of adulthood and how those adults exploit their power to manipulate children and the elderly (in they film, they’re treated with the same regard).  When such abuses come to light, the ultimate question is what you do with your second chance.