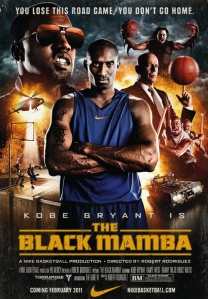 Director of Sin City Robert Rodriguez just made a short film for Nike featuring Kobe Bryant, along with cameos from previous Rodriguez collaborators – and it’s awesome.

You can watch the film below:

At least if Rodriguez is going to do a commercial it gets to have his artistic stamp front and center.  Now flush with cash, maybe he’ll finally get Sin City 2 made.

Also, were they purposefully riffing from The Sandlot with the quote at the end?

“Heroes come and go, but legends are forever.” – The Black Mamba
“Heroes get remembered, but legends never die.” – The Sandlot