‘The Roommate’ Set To Be A Collegiate Guilty Pleasure

Posted on February 2, 2011 by The Filmsmith | Leave a comment 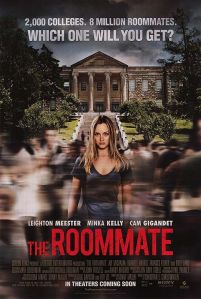 I can already see the words critics will use to describe director Christian E. Christiansen’s new film The Roommate: awful, trashy, smut, horribly predictable, misogynistic, unrealistic, stiff acting, and cliché. And you know what? That’s okay.

In case you haven’t heard of the film, catch the trailer below.

The film’s main premise is revealed in the trailer; it seems to be a straightforward, brutal film exploring the nature of paranoia, anxiety, and psychological isolation and what these things do to a person. Sex, blood, and violence seem to be at the forefront of the film, and it should go without saying that if you prefer prestigious high-brow films, you should stay away from this one. But if you love trashy just-for-the-hell-of-it goodness, then this is what you’ve been waiting for.

Christiansen was nominated for an Oscar back in 2007 for his short live-action film, At Night, and since then has worked in television and made another feature, Zoomers, in 2009. Christiansen has shown he knows how to make a coherent film, but the question is: can he make a financially and critically acclaimed film?

I don’t think The Roommate is going to be after any Oscar nominations–but sometimes, that’s what the audience wants: a film that isn’t trying to be anything more than what it is. The film will star Leighton Meester (Gossip Girl) and Minka Kelly (Friday Night Lights) and is set to be released this coming weekend. What do you think? Will you end up going to see this at the theaters? Let us know what’s on your mind.

Like Loading...
This entry was posted in News and tagged Christian E. Christiansen, College, Leighton Meester, Minka Kelly, The Roommate. Bookmark the permalink.