Posted on February 1, 2011 by The Filmsmith | Leave a comment 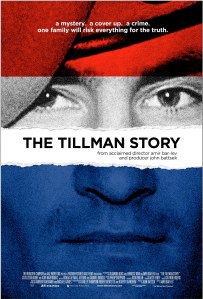 2011 will mark the 10-year anniversary of the attack on the Twin Towers, a moment in our nation’s history that spurned a fervent cry of patriotism that could be heard the world round. One such patriot was Pat Tillman, a safety for the Arizona Cardinals, who turned down a $3.6 million contract to enlist in the Army. When news came back that he had been shot in combat, a heroic story was told of how he had saved several lives in his refusal to leave men behind, and after their rescue was shot by a stray bullet. This is what the military told his family and the media. This is not what happened.

Pat Tillman wanted there to be as little pomp as possible when he enlisted. He wanted to be treated as a normal soldier, even in death. But, unfortunately, everyone knew who Pat Tillman was. He was a celebrity who gave up everything to fight for his country, and became something of a national symbol in the process. This is a true patriot.

As Pat’s family began to investigate his death, though, the Army admitted that he was killed by friendly fire. Friendly Fire. His own men shot him, and the Army gave his story that grandiose tinge of heroism. They still stuck to the story that Pat was killed during this firefight, and contributed to saving men’s lives, but their story couldn’t hold up for long.

Pat’s comrade and (wartime) closest friend, Russell Baer, after being instructed to reveal nothing to the family, told a much different story. Pat’s battalion went up to a hill with their Afghan guide when no enemy was around to scout up ahead, and the battalion following them began to shoot at the guide. As they got within 20 yards, shooting periodically, Pat tried to catch their attention with his dying words, “I’m Pat F***ing Tillman!”

The film traces the family’s investigation into the incident, and the refusal of the military to cooperate. The family had to beg Congress to do a formal investigation, and they sat back speechless when Donald Rumsfeld & Co. all responded that they “didn’t recall” when they first found out about the specifics of Pat’s death.

In terms of documentary finesse, this probably doesn’t deserve any major awards. But the simplicity of its storytelling is completely appropriate for its subject. Pat Tillman’s story is one that needs telling, especially in such a fierce political environment. It challenges the actions of our military (if chain of command is intact, who didn’t tell their boss?) and our frequent attempts to create martyrs post-mortem.

Pat simply wanted to be treated as a human being, but due to his high profile status, his life was turned into some kind of propaganda. None of us deserve to have our lives turned into some kind of charade. It diminishes not only the achievements of our fellow men, but our own as well, as if our lives are unworthy. In death, all we can hope for is the chance to be seen once and for all as who we are, and Pat Tillman wasn’t given that chance. He was betrayed by the country he loved. And perhaps the reality of his story, who he really was, can change that country for the better.

If you are interested in reading more about this incident, Jon Krakauer (author of Into the Wild) just published a book on the same topic.

Like Loading...
This entry was posted in Reviews and tagged pat tillman, tllman story. Bookmark the permalink.