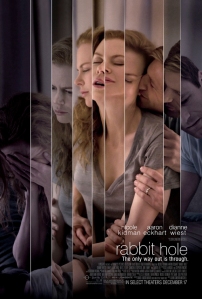 John Cameron Mitchell reinvigorated the sexually confused rock musical with Hedwig and the Angry Inch, following this with a meditation on (explicit) sexuality’s emotional power in Shortbus.  For Rabbit Hole he takes on the straight couple demographic, as Nicole Kidman and Aaron Eckhart try to keep their marriage from sinking on rocky shores.

The simple synopsis above contains all the specifics I can say, since the film’s revelations are the best kind of tease, smoothly coming to light like a morning sunrise.  Mitchell’s light touch with the film’s structure is ultimately what makes the film so enjoyable; poignancy comes first from the mystery of tragedy, then by the way the film follows Becca (Kidman) and Howie (Eckhart) through their grief.  For the film’s first half Howie is dumbstruck by Becca’s disconnection from the incident, and we share his sentiment.  Yet mid-way through we see that Howie’s method isn’t perfect either, with the potential to turn into violent bitterness.

Kidman and Eckhart are the heavyweights of the film (and justifiably so), but props are also due to Miles Teller for his performance as the fragile teenager Jason.  The dull facial expressions, mature use of silences, and comprehension of a scene’s emotional beats bring to light the true impact of the film’s tragic event (while also hinting that Jason may suffer the most harm of all).

Showcasing the destruction of the family is an easy task, but it takes true gumption to provide hope without appearing trite.  Mitchell’s endeavor succeeds.