WWII Films You Haven’t Seen (but should)

Today marks the 69 year anniversary of the Japanese attacks on Pearl Harbor, which kicked off the U.S.’s direct involvement in World War II (indirect involvement consisted of the Lend-Lease Act and the “cash and carry” initiative).  Almost everyone has seen Saving Private Ryan and Schindler’s List, but many probably missed out on some great World War II films released in the 2000’s.  Such as…

In contrast to Spielberg’s wider narrative of the Holocaust, The Pianist follows one guy, Wladyslaw Szpilman, as he avoids getting sent to concentration camps. Adrien Brody plays Szpilman as he hides in cubby holes with grenades, witnesses the Warsaw Ghetto Uprising from afar, and struggles to stay fed. Through one man’s journey you get an inside look at what it was like under Nazi rule. The little details and moments make this a formidable venture.

Known to the rest of the world as the film that launched a thousand memes, it’s an extraordinary look at Adolf Hitler, his administration, and their last days.  When most people call Hitler crazy, most think of the Holocaust.  It was so much more than that and Downfall captures it.

MINOR SPOILER ALERT Seeing Magda Goebbels kill her six children since she cannot imagine a future without the Third Reich is a chilling scene – and provides a perfect example of Hitler’s ideological power over Germany.MINOR SPOILER OVER

The film is 2 1/2 hours long (3 if you watch the extended version), but the brilliant actors and sense of inevitable doom make it fly by.  It also helps that it’s mostly historically accurate (based on a book by Hitler’s secretary and historian Joahcim Fest), making it an intoxicating WWII film.

The companion piece to Flags of Our Fathers, Clint Eastwood shows us World War II from the Japanese perspective, with Japanese troops battle U.S. soldiers and their own sense of honor and duty.  As World War II recedes in memory, a new filmic historiography is emerging that allows greater understanding of our former enemies (see above).  Given the brutal fighting on the Pacific front, Eastwood’s humanizing touch is a blessing. 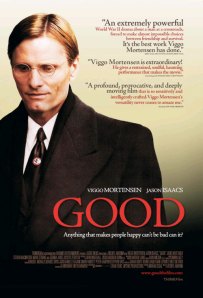 Viggo Mortensen stars as professor John Halder, who gets tapped by the Nazis to draw up some policies on euthanasia. What makes the film so notable is the lack of overdramatic tactics. Halder isn’t a blatantly evil man at the beginning or even at the end of the film. Instead, we see how someone can be swayed into evil acts if he remains aloof and unanchored. One of the best psychological analyses of Hitler’s Germany.

2 responses to “WWII Films You Haven’t Seen (but should)”