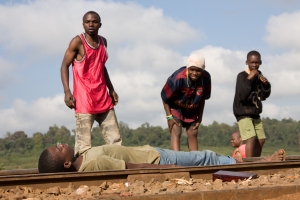 Films that don’t come from traditionally Western nations rarely get cinema attention.  However, with films like City of God (Brazil) and Slumdog Millionaire (India) seizing the spotlight, Soul Boy could bring the rest of the world to Kibera, Nairobi.

Abi’s father has lost his soul to a ‘Nyawawa,’ a female magician who takes the souls of cheating husbands.  When Abi meets the Nyawawa, she assigns Abi seven tasks that he must complete before his father’s soul will be returned.

Soul Boy is a brisk paced quest film that is equal parts mystery story, as we’re curious how Abi is going to accomplish his tasks.  The film also avoids the pity party that could accompany a film set in the slums of Nairobi.  When Abi follows his Aunt Susan to her job at an upper-class white man’s house, he asks the father of the house, “Are you happy?”  His non-committal “I don’t know” reflects the inability of opulence to ensure true happiness.

Watching Abi dart around following signs and completing tasks is entertaining, but Abi’s tasks are also instructional.  To save someone’s life or to be in another man’s skin–these are tasks we should all learn in order to become adults.

Underlying an already great film is the community filmmaking philosophy that helped create it.  Supervising director Tom Tykwer (Run, Lola, Run) set up workshops and apprenticeships to teach locals professional filmmaking skills, which were used to film non-professional actors in the area.

On its own, Soul Boy is a solid, entertaining, film. It gets even better when you realize the love and community building with which it was made.  Definitely check this one out.