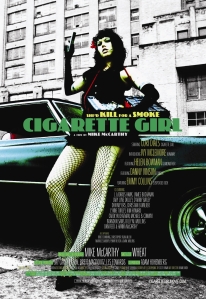 Cigarette Girl: you could watch it for a cool credit sequence and to ogle the nearly naked Cori Dials (playing the Cigarette Girl), but you’re better off re-watching Sin City than this Walmart bargain-bin piece of cinema.  The acting’s bad, the story isn’t nearly as cool as it could have been (dystopia where smokers are put in ghettos and cigarettes cost $60+), and the lead character just seems like an object for sexualization and violent fantasies.

I am by no means a prude and I knew what to expect from the film.  But even expecting a Frank Miller-tinged joyride, it was boring and a at times off-putting.  Questions like, “Why does this ‘badass’ character just take a literal belt whipping without fighting back?” or “Why is she punching her fridge in her underwear, fishnets, and high heels?” are items director John Michael McCarthy has no interest in answering.

I know that a trip through the cinema is almost impossible without a female character being objectified, but my particular complaint is how self-consciously the film frames Cigarette Girl, to the point that it removes us from the story. If you’re going to sexualize female characters, at least commit yourself to it and don’t try to play it off like you’re not.  Could you imagine Jessica Alba’s character Nancy from Sin City kicking ass out of nowhere?  No, because she’s already set her up to be a pretty thing for Hartigan (Bruce Willis).

You have to bring balance to the character if you want them to be a credible beauty and badass.  Rosario Dawson’s Gail in Sin City was both because they showcased her character with fishnets, but also guns and an attitude to match.  Cigarette Girl lacks a credible balance and instead problematizes its own depiction of sexuality and violence – not to mention it’s poorly acted, poorly delivered, and overall boring.

Even as a straight to DVD piece of entertainment, there are better titles you could find.