“HIGH School” is a more fun than I remember

A high school comedy in which two former friends come together to get the entire campus stoned could reek of not just THC but of banal stoner snickers.  However, High School ensured that, despite my sober state, I would have just as much fun as the chemically altered characters on screen (sans the paranoia).

Henry (Matt Bush) is a straight laced overachiever who eyes his fantastic GPA as his ticket to freedom. In contrast, his former childhood pal Travis (Travis Breaux Sean Marquette) is the pot-smoking slacker who merely laughs at the Sharpie-d cock scribbles on his face, compliments of his other underachieving compadres.  Separated over the years, a minor car accident bring Henry and Travis back together to visit their childhood treehouse.  Despite the fear of being institutionalized like the kids in the PSA’s, Henry decides to try a joint to loosen up his intensity. When Principle Gordon decides to institute a school wide drug test, Henry’s MIT scholarship and valedictorian positions become imperiled. But Travis has a plan to hide Henry’s urine results: baking the entire school in the hopes of having the test results discarded.

The cornrow’d, tatted, and twitchy Adrien Brody as Psycho Ed is a far cry from The Pianist, which makes it all the more an unmissable display of his virtuosity: while he’s delightfully demented, you really don’t want to piss this guy off. 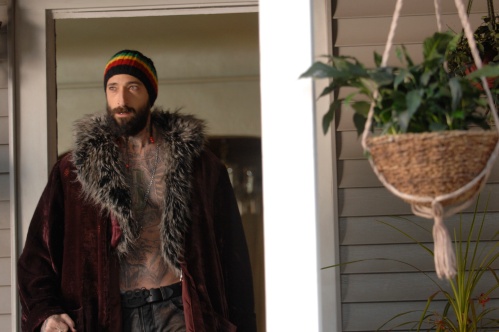 Don't try giving him a hug. He will seriously eat your head.

If you’re not looking for it, you just might miss Michael Chiklis under a frumpy mustache and toupee.  Other familiar faces, Colin Hanks and Brian Williams (among many others), round out the film’s smorgasbord of hilarity.

If you were a fan of Detroit Rock City or Superbad, you should smoke this comedic fattie.