“Jackboots on Whitehall” is puppet fun for all cultures 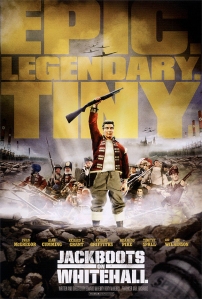 Fans of Team America: World Police are probably dying for more films from Matt Stone and Trey Parker.  Until they finally cut their ties to Viacom, there’s another outlandish puppet comedy to whet your appetite.

It’s 1940 and in this alternate history, the Hindenberg flies with armor plating and England has been invaded by the Nazis.  Denied a military job due to his grizzly bear sized hands (his fingers can’t fit in the trigger guard), it’s up to farm boy Chris to rescue Winston Churchill and his country from the Third Reich.  Joined by Fiske, the explosion retardant American, and an elite Punjabi unit, the Englanders flee North to the inhospitably barbaric “Scot-Land” for safety.  Stuck between Nazis and the foreboding territory of the Scots, they make a final stand.

Where Team America relied on mad puppetry and The Nightmare Before Christmas utilized stop motion claymation, Jackboots on Whitehall manipulates Barbie doll type puppets and minor digital effects for mouth movements in a manner familiar to those who watched Shining Times Station.  The attention to the minutiae of this miniature world will have Coraline and Team America fans alike struck with wonder. 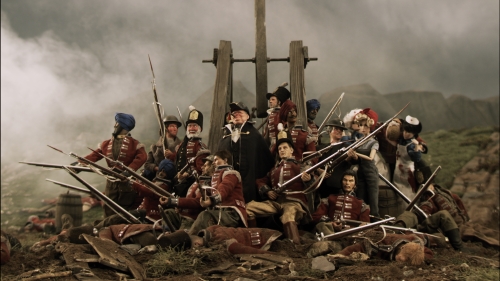 Especially when sh*t gets blowed up good.  When the Nazis attack Downing Street, it recalls the chaotic, gritty combat of Saving Private Ryan, and the ending, that of Helm’s Deep and Braveheart.  For those of us still in love with practical special effects (and the action films that are allowed to exploit them to the hilt), you’re going to freakin’ love this movie.

When puppets aren’t being brutally slaughtered with the flourish of Tom Savini, hilarity is found when we meet the Nazis and the Scots.  Goebbels looks like an orc toddler, gangrenously colored, mouth agape, and eyes plucked from Gollum.   He, Göring, and Himmler, plot death to the Englanders and run around Buckingham Palace with Hitler in Queen Elizabeth drag. The Scots are equally parodied, effectively saving the day (in more ways than one) with their Viking manliness and 13th century weaponry.  The way the English talk about “Scot-Land,” and even the accompanying Nazi’s fearful whispers of the region, hit the precise note of over-the-top humor it should embrace for the full 93 minutes.

Unfortunately, it takes missteps: treating the angst of Monster Hands McGee Chris and his romantic sub-plot with Daisy with dramatic tonality ill-fitting to the overall picture.  These moments lack the madness and outlandish caricature that the lone American hero,* the Nazis, and the Scots all receive – which reveals how the film goes conspicuously light on the English caricaturizing. Sure, Daisy’s crazy vicar father brings chuckles whenever he brings up Chris’ freak fingered features, but the English jokes are mere light ribbings that play outside of the film’s zany atmosphere.

When the film’s life is seeping out during these moments, the formalistic restraints depress it further. Unlike other animation films, the Barbie doll puppets (shot live action) lack varied movement and thereby, the energy, to hold our interest. The dynamic movements of Robot Chicken or even Pixar films is part of the joyride, but in abandoning stop motion, the makers of Jackboots on Whitehall rely on stiff mechanics that prove a detriment to the film when it can’t blow things up or deliver hilarity.

Though Jackboots on Whitehall isn’t committed to the type of self-aware ridiculousness in overdrive that makes Team America so entertaining, the Nazis and Scots pick up the slack while you’re enchanted by the intricately detailed sets, characters, and war machines. Though it loses its way from time to time, the miniatures and outlandish caricatures from World War II iconography make it a unique, and at times, hilarious viewing.  Jackboots on Whitehall earns double plus good points.