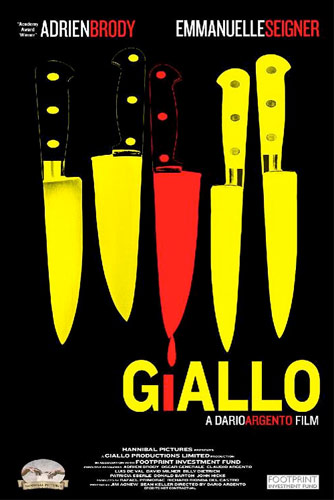 Dario argento has been playing the horror game for several decades, known by fans for his penchant for gore and his cult classic Suspiria. Argento pictures come with expectations.

The basic expectation of any director with the degrees of power and prestige afforded by such an audience following is that subsequent films will not be crap. Argento’s latest, Giallo, doesn’t succeed at being a serial-killer thriller, but earns watchability points for its campiness.

Giallo follows a serial killer who leaves the mutilated remains of foreign models for Inspector Enzo Avolfi (Adrien Brody) to decipher. When model Celine is abducted, her sister Linda teams up with Avolfi to find her before she’s bodybagged.

The film begins along well worn paths, as we see a female victim killed more for her stupidity than the antagonist’s malice. The relationship that develops (if you can call it that) between Avolfi and Linda deepens the film’s inanities, as Avolfi easily allows Linda to be privy to the details of the case, bloody photographs and all. (If this were a better film, this lack of professionalism would be rewarded with a plot twist in which Linda’s really the killer; too bad it’s not). 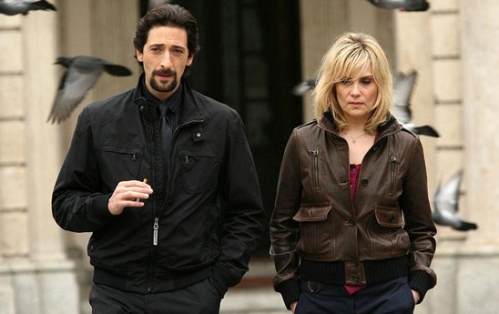 Whether it’s due to a shoddy script or awkward directing (take your pick), the acting is forced and uninspired. Emmanuelle Seigner as Celine’s sister must have been pulled from the soap opera talent pool as she busts out her intense eyebrows of doom through the entire film to show her frightened, worried nature. Even Adrien Brody, who was great in The Pianist, Hollywoodland, and The Darjeeling Limited, is weak here, groping so tenaciously for the embodiment of hardboiled film noir detectives of yesteryear that we’re forced to laugh at his earnestness.

One such piece of earnestness took the film from Okay Thriller Ville, straight into Camp Town:

In a relationship development scene between Avolfi and Linda, he tells her why his boss, Inspector Mori, finds him well suited for his job: Avolfi saw his mother murdered by a bald, scar-faced man as a young boy. Following her death he was sent away to his uncle’s in New York. Avolfi returned to Italy years later and found the killer working in a butcher shop. In the flashback, the young Avolfi beats the sinister man with a club, and proceeds to stab him with a butcher’s knife repeatedly with a savagery reminiscent of Lord of the Flies. When he looks out the butcher shop’s display window he meets the gaze of young Inspector Mori. Avolfi sums up: “I explained everything to him.”

“He seemed to understand.”

“After that…I was never the same.”

Rinse and repeat till credits.

Combine the issues with the story, the script, the acting, the effects, the cheap score (you can almost hear the two pennies they paid Marco Werba), and Argento’s archaic, at times just bad, camera work, and the only thing left is laughter.

The first half of the film is fairly disturbing, featuring mutilated girls and an unseen face behind the pruning sheers. However, with the escalating awkwardness of the film’s various elements (see list above), Avolfi’s flashback scene pushes you over the proverbial edge; crippled by the drop from such heights of absurdity, you’re unable to take the rest of the film seriously.

The only question that remains is how Argento and Brody got involved with such a picture (much less why Brody would want an executive producer credit after reading the script). Recently Argento made an appearance at the Fangoria Convention in New York, with fans quoting Argento as unhappy with the picture and unsure of its release. Maybe Argento himself is wondering how the hell he got involved…

So round up some friends, pass the drinks, and have a good laugh. Giallo will go down as the most recent definition of true camp: attempts at earnestness in the face of a film’s self-constructed absurdity. If you’re looking for anything else, you’re better off trying to discover fine sushi in dog shit.

*this is not writer’s interjection, this is how the audience genuinely reacted to the premiere at the Edinburgh International Film Festival

One response to “Giallo Review”