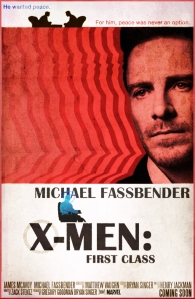 The re-boot: what an intriguing concept. A production company just Etch A Sketches the previous narrative to start a new one.  One motive is the hope of re-invigorating a franchise that’s hobbling along; both Spider-Man and X-Men got their re-boots (Spider-Man hits next year) after weak third installments. Or maybe you just don’t want to spend the money to maintain your now-expensive lead actors and directors.  For the audience it’s almost like losing the lottery: you spend three films (over the course of a decade) investing in the characters and their narrative, only to be told you’ll have to re-invest (maybe that’s more like the stock market).  Fortunately X-Men First Class offers some legitimate incentives to do so, but it’s not without its flaws. END_OF_DOCUMENT_TOKEN_TO_BE_REPLACED

In all likelihood, the 2000’s will be looked upon as the decade of the comic book movie, with plenty of vigilantes bouncing around in various forms of outlandish garb, dishing out justice from fists, claws, and expensive gadgets.  Of course, when these heroes take the screen, critics take them down, laying bare the genre’s love affair with violence as a problem-solving tool, as well as the recent trend of sexualized female killers (Sucker Punch). I don’t agree with many of these assessments (usually critics are picking on the wrong films), but Super is a superhero film critic’s rantings come to life; reveling in the usual tropes of the genre with a deliciously twisted bent, then showcasing their disturbing nature when placed within a context beyond comic panels or film frames – the real world. END_OF_DOCUMENT_TOKEN_TO_BE_REPLACED