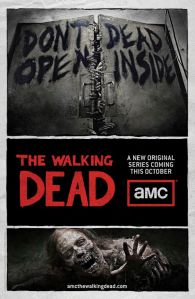 Some readers might have noticed the conspicuous absence of The Walking Dead from my post on tv worth watching.  Though it has earned over 5 million viewers in its premiere episode, I was worried that the show didn’t have the heart of the comic books.  However, after seeing the third episode I am glad to welcome this new series, which looks to be heading toward less zombie killing gratuity, and more dissections of what it means to exist within this apocalyptic setting. END_OF_DOCUMENT_TOKEN_TO_BE_REPLACED

I suppose one of the defining features of a film snob is abhorrence for television.  All those commercial breaks, laugh tracks, overwrought dramatics.  But in both film and television there’s a lot of crap – you just have to know where to find the good stuff.  So as a film fan who does not have cable or those digital boxes to even watch basic channels, here are the shows (past and present) that make me wish I did. END_OF_DOCUMENT_TOKEN_TO_BE_REPLACED

After many low quality youtube recordings from Comic Con, AMC has released a trailer for its latest tv series, The Walking Dead: