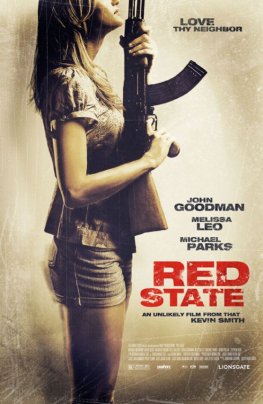 Kevin Smith has been making films for almost twenty years, generating a couple of films that hit critical pay dirt (Clerks, Dogma), a few that made cash and satisfied the converted (Clerks II, Jay and Silent Bob Strike Back), and others that achieved an almost cult status (Chasing Amy, Mallrats).  Before bromance became a part of our lexicon thanks to Judd Apatow flicks, Smith was perfecting the model (Clerks, Chasing Amy, Dogma, Clerks II).  Considering Smith’s reputation, deeply entrenched within the bromance and dick jokes niches, it’s a dumbfounding discovery to find that his tenth film is a mature, nuanced look at the horrors of contemporary America.

Gun-toting bible thumpers aside, what’s really on display in Red State is the horror of reality.  Michael Parks’ long-winded, but nonetheless discomforting, sermon as Preacher Abin Cooper doesn’t come from ski-mask killers or the hyper-reality of The Texas Chainsaw Massacre: this is in our own backyard, in the (unfortunately) mundane headlines.  Considering that there have been a higher number of terrorist attacks (or plots) by white Christian males than Muslims in the U.S. over the last decade, there are obvious connections between the real and the reel.  Westboro Baptist church is an obvious point of inspiration for Smith (it’s actually mentioned in the film), as both Westboro and the film’s fictional Five Points Church protest homosexuals (and acts construed as related to homosexuality).  However, the Five Points Church takes the whole “GOD HATES FAGS” thing beyond obnoxious signs and straight to the ritual slayings.

But Christian fundies aren’t the only menace on the playground.  In a surprising shift, the power of the post-9/11 government to handle the country’s “troublemakers” is conveyed with equal creepies.  As ATF agent Joseph Keenan (John Goodman) tries to defuse a stand-off at the Five Points Church, his bureaucratic superiors are more concerned with bad publicity than human lives, and the presence vast powerful network of national policing (FBI, CIA, military and the legislatures that enable them)  is felt pressing down from on high by the film’s end.  Two fears that are traditionally separated (liberal fears of religious fundamentalism, conservative concerns with big government) are brought together into an unholy horror union.

If the self-distribution model was a reaction to distributors, Red State itself seems to be another blimp-sized “F*CK YOU” to film critics who tore apart his previous film Cop Out.  Never have I seen a filmmaker re-invent the craft to such a drastic degree.  How can a filmmaker who has been working for almost twenty years trash his old ways of: Writing?  Directing?  Editing?  How do you come back to the screen stripped of all previous stylizations and interests?  Smith drops the traditional laughs and goes for high tension drama (writing), allows jump cuts to collapse time (editing), and steadicam movements to explore the world sans tripod (directing).

I’ve been going through the filmographies of Danny Boyle and Christopher Nolan recently, and when you watch a director’s work back-to-back, you recognize thematic or artistic patterns – and Red State is distinctly un-Kevin Smith.

Instead, we’re welcoming Mr. Smith’s doppelgänger, and he’s a lean, mean, film cutting machine who’s after our sacred cows with none of the knowing winks of Dogma.  What keeps him up at night isn’t the salsa shark or the random bit of bestiality.  It’s the banality of the evil lurking in the American countryside, insidiously hiding behind societal malaise; laws passed in the name of the populous; and dangerously simplified, draconian ideas about faith.

For one reason or another, I imagine this new, re-newed, doppelgänger Kevin Smith slow-motion walking into a vast ball room with The Eagles “Hotel California” playing gently in the background.  A waiter pulls out a chair for Smith and says, “We’ve been expecting you.”

One response to “Kevin Smith completely reinvents himself with Red State”