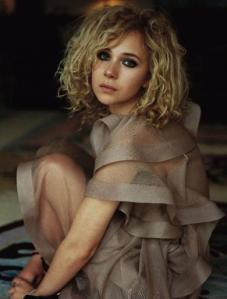 First there was Anne Hathaway and Tom Hardy, followed by Joseph Gordon-Levitt. And now there’s been another addition to the already stacked cast of Christopher Nolan’s The Dark Knight Rises–Juno Temple.

Temple is the daughter of director Julien Temple (Bullet, 1996) and has played roles in Cracks, Atonement, and Notes on a Scandal. Variety claims that she will play “a street-smart Gotham girl.” SlashFilm has an interesting theory about the role she will play, saying:

Much more likely, however, is that she’ll play another Frank Miller character, Holly Robinson, who is friend to Selina Kyle, aka Catwoman…Holly Robinson, introduced by Frank Miller in Batman: Year One, does seem like the most likely role. She was “a juvenile prostitute who lives with Selina Kyle,” and in various incarnations has actually been trained to replace Selina Kyle as Catwoman. Juno Temple’s basic appearance definitely works with the way the character has been drawn over the years.

This would be an interesting dimension added to Nolan’s series because, whereas some had wondered if Robin would make an appearance, audiences may get a different sidekick in Temple. As always, Nolan isn’t letting all the cats out of the bag just yet and fans will have to wait until an official announcement is made.