Here is a film directed by the same guy who did My Bloody Valentine 3D, starring the lately lack-luster Nicolas Cage (Season of the Witch, Sorcerer’s Apprentice), and a ridiculous title.  Drive Angry 3D has all the packaging of a sh*t sandwich, which is why you’ll be confused, then delighted, with how awesome it is.

John Milton is tracking Jonah King, a cult leader who has kidnapped a baby he plans to sacrifice for the devil.  After eying a ’69 Dodge Charger at a local diner, Milton hitches a ride with its owner, the blond waitress Piper.  The two battle King’s minions, state troopers, and a mysterious man who calls himself The Accountant, to stop King’s baby blood-letting.

Our introduction to Milton, played by Nicolas Cage, is a car chase  that ends with hands blown off and meaty chunks of a thigh opened up by a point-blank shotgun blast.  If you were laughing at Cage’s dyed blond long locks, his penchant for person mangling shuts your trap with an audible “click.”  Ghost Rider this is not.

Cage’s travel pal Piper played by Amber Heard is mercifully not just a pretty face, but an ass kicking gal who has decent acting skills.  You root for Piper when she swaps right hooks with her dirt bag boyfriend or has to leap from moving vehicles. All of this, in addition to her loyalty toward Milton’s quest, make her the most sympathetic character of the film’s main trio.

I did say trio, because William Fichtner as The Accountant could arguably be the most intriguing and entertaining.  He’s got a sick sense of humor as he pins a guy to a wall with a baseball bat and laughs at the cult members who think they’re in the Devil’s favor for killing babies in his honor.  Cage gets to be a scruffy scary badass, Heard makes us care about the story, and Fichtner gets the punchlines.

One of the most understated characters of the film, however, is the southern white trash environment of rural Louisiana.  Car chases take place along innocuous bridges, beneath crisscrossing highway overpasses, or around abandoned manufacturing structures.  In line with the film’s down-and-dirty style, it’s a story that takes place far away from the trivial concerns of the middle class.  From Piper’s diner gig and trailer park dwelling to Jonah King’s soft southern accent, this is a battle that could only happen in bayou country and it has all the zest of good jambalaya  (amusingly, Drive Angry 3D feels more like Louisiana than Cage’s Bad Lieutenant: Port of Call New Orleans).

One of the reasons I own The Punisher (2004) is not for the terrible dialogue or John Travolta.  I own it because I love the film’s action.  The Punisher director Jonathan Hensleigh stated that he wanted a film that felt real and thereby went out of his way to shoot most of the stunts on real locations with real cars. 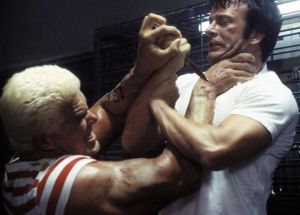 Which is exactly how Drive Angry 3D was made.  When a truck flips ass over tea kettle or people are shot, you feel it.  Even when CGI is employed (one scene with The Accountant in particular), it’s used sparingly and, at times, for comedy currency.

Films like Crank or Grindhouse (specifically Rodriguez’s segment, Planet Terror) set up their outlandish sequences in a way that encourages howls of laughter; whereas the Resident Evil franchise performs as if it’s a legitimate action film.  The point being, if you aren’t aware of how bad you are, then it’s torture to witness (read my review of Resident Evil: Afterlife ).  Drive Angry 3D knows how bad it is and plays into it, earning itself a place among the growing number of hilarious Grindhouse inspired films in the last four years (Black Dynamite, Machete).

For example: In a send up to Shoot ‘Em Up, one scene has Cage sexing a waitress, holding onto a bottle of whiskey, and dispatching goons with his gat, all without missing a beat.  The best scene has Cage being offered a beer.  He replies he won’t have one “unless I’m drinking it out of Jonah King’s skull.”  By the end of the film, Milton has popped open a beer and is casually sipping beer from King’s skull like he’s in a rocker on a hot summer night.  It’s a brilliant (macabre) comedic moment.

I have routinely blasted the use of 3D as a cheap gimmick that at its best can be praised for not getting in the way of watching the movie.  For Drive Angry 3D though, I’ve got to say I liked it.  It never caused headaches or eye strain, and for a film that’s about being over-the-top and loving it, having bullets pop from the screen just added to the adult carnival ride of wonders.

Amazingly, Drive Angry 3D manages to have interesting characters, a story that keeps you involved, 3D that can be justified, plenty of good action, and will make you cackle gleefully.  I’ve left out some of the story details (why Milton is so pissed off and violent) because the mystery of Milton and his gradual reveal make it a legitimate point of narrative intrigue.  I’ve even tried to avoid giving away all of the best scenes because you flippin’ need to see this movie. If you enjoy swearing and violence like you’re watching a perverse episode of Loony Tunes, Drive Angry 3D will be your cup of tea.