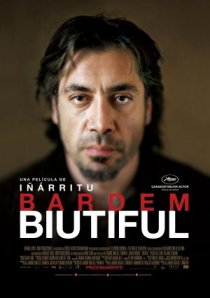 When I left the theater, slightly dazed, after seeing Biutiful, I knew that I would write this review; whether it would be positive or negative was still up in the air. All I could tell for sure was that while watching this difficult, slow, and often frustrating movie I had experienced something, glimpsed a great truth, gained and lost an infinite thing. Many people will dislike this movie, as they have  Inarritu’s previous films (Babel especially). But for me, 72 hours later, there is little else occupying my mind.

The film focuses on the travails of Uxbal, a middle-man in an oppressive exploitative world, who finds out he has cancer. He is a good man, though this is hard to tell from the surface of his actions. He coordinates operations for a ring of immigrant labor, providing money and arranging the trade and sale of  various knock offs and bootlegs manufactured in a dingy basement. He seems to be a “bad guy,” but you can tell by his interaction with the workers that he cares for all of them; he even demands that their living quarters be ameliorated, as he is providing the money anyways. He also works with the police, supplying bribes to make sure no one gets caught.

But this life doesn’t last forever. Uxbal’s discovery one afternoon that he has cancer changes everything. He decides to set things right: to repair the relationship with his bi-polar and self-destructive ex-wife, to ensure his children are safe, and to end the mistreatment of his workers. Uxbal doesn’t have any time, as he is given a month or two, and he decides to put aside petty differences to try and do something. In the words of his spiritual predecessor, Kenji Watanabe from Kurosawa’s Ikiru, “I can’t afford to hate people. I don’t have that kind of time.”

Ikiru is actually a very similar film. In it, Kenji (played by the Kurosawa staple Takashi Shimura) discovers he has cancer, and realizes he has not “lived” for the last 20 years. He has gone through life in a hazy existence, never appreciating what he has, never enjoying or understanding life itself. All of a sudden he is brought face to face with his own mortality and he decides he will do one good thing before he dies. For him, that is the construction of a playground, alluded to at the beginning of the film as a project that no one wants to take the initiative for. But he builds it, and finds that in the end he is able to look back at one thing and feel proud.

Ikiru is a film about personal existentialism. It is about the meaning of life, and how the pursuit of it is indistinguishable from figuring out what is meaningful to us. There is something comforting in that. But Biutiful has no intention of being comforting. It chooses to seek after a larger, more global and gritty existentialism. In a polluted, disintegrating world in which morality is skewed and goodness is entirely internalized, how can anything be beautiful? Can Uxbal find redemption, or are his actions doomed to be empty gestures, false hopes of forgiveness?

In an aesthetic way I cannot tell you whether or not Biutiful is a good film. I loved it, but it has its flaws. The separation from Inarritu’s previous screenwriting partner, Guillermo Arriaga, is noticeable; sometimes the only thing carrying the film is Javier Bardem’s incredibly, even brutally, human performance. (It’s a shame, actually, because Arriaga can’t direct to save his life, as is evidenced in The Burning Plain. They really should keep working together.) The screenplay, and by extension the film, become a little muddled and confused and at times lacks logic.

And yet, somehow, in spite of its failings, this film got a hold of me. In Yusuf Atilgan’s novel The Loiterer, there is a passage which reads, “There is a creature with a short life-span these days that was not known in previous centuries. A person who just left a movie theater. The film he’s just seen has done something to him. He doesn’t just think of himself anymore. He’s in peace with all people. But he dies in 5-10 minutes. Because the streets are full of people who did not just leave a movie theater; with their straight faces, sneaky steps, they take him inside and melt him.” I left the theater that night with the themes and characters wrestling inside me. Perhaps it was because the artifice seemed to slip away, because Inarritu at some point stopped making a film, and started filming a character in free fall. It stopped being art, it stopped being a movie, an escape from the world; instead it became the world. It became experience. It became real. For the life of me I can’t figure out how he did it. But it was biutiful.

3 responses to “Biutiful is Emotionally Wrecking”