Red Riding Trilogy – A panorama of the human condition 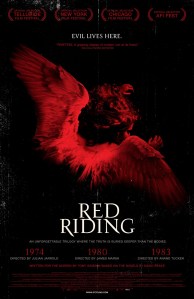 “Evil Lives Here.” So states the tagline of the made-for-TV miniseries, Red Riding. In it we follow the plethora of lives in a community rebounding from loss and pain as a serial killer stalks their streets. We see a journalist and two cops as they try to make sense of the destruction that surrounds them. But we also get a glimpse into the lives of the victims of such tragedy. Another girl has gone missing, and everyone is rushing around trying to find her before it is too late. Evil may live in the county of Yorkshire, but so does hope, and that makes all the difference.

First off, The Red Riding Trilogy is a strange beast. Here we have three films, based off of four novels, all adapted by Tony Grisoni, but each installment is directed by a different person (Julian Jarrold, James Marsh, and Anand Tucker of Brideshead Revisited, Man on Wire, and Shopgirl respectively). The narrative is hardly continuous; we follow three distinct characters who barely appear in the other films. But these were also filmed at the same time, and aired on British television as a miniseries. Welcome to the convoluted world of 21st century cinema.

MINOR SPOILERS AHEAD (that is, implicit references to things that may have occurred in the earlier films)

The first film, Red Riding 1974, follows rookie journalist Eddie Dunford (played by the ever rising Andrew Garfield) as he tries to find connections between three crimes. A little girl has gone missing, and Eddie recognizes some similarities between two previous cases, similarities which he presents to his editor. The gruesome philosophy of the newspaper (If it bleeds, it leads) causes Eddie to pursue these suspicions. In his quest, he begins an amorous relationship with the missing girls mother, uncovers rampant police corruption, and discovers one of the men behind the abductions. For fear of spoiling too much, I won’t go into further details.

In the second film, Red Riding 1980, we begin to see the work of the actual Yorkshire Ripper. Paddy Considine, in perhaps the best performance of the lot, portrays the conflicted Peter Hunter, a Serpico-like cop who follows his duty with a vengeance. He has previously investigated corruption in the constabulary, and is now pulled up to run a super squad investigation into these unsolved murders. Due to the amount of corruption, he makes little headway, with police stopping him at every turn, and he also has a relationship with one of his coworkers that he needs to work out. Amidst all of this, the killings continue.

At the end of 1980, a man is caught and believed to be the Yorkshire Ripper. But the Ripper is only concerned with murdering prostitutes, not children. So in the final chapter, Red Riding 1983, we follow a minor character from the previous films, Maurice Jobson, as he discovers that the man imprisoned for those crimes was actually innocent. Through flashbacks we relive the investigative side of those early crimes, and see how the corruption in the police department led to grievous miscarriages of justice. Overwhelmed by grief, he tries to set the record straight and solve the newest case of a girl gone missing before she, too becomes a file in a drawer.

Now, that’s a whopper of a story without my providing any real details, but it needs to be in order to last the 5 or 6 hours of its runtime. Each film follows a different narrative, but the characters overlap and the history is the same. But  as much as it seems it would, the focus of the film, the real essence of it, has less to do with the murders and abductions than it does with the reverberations around the county. Girls are being kidnapped, a killer is on the loose, and you can’t even trust the police. The people in these films are stranded in their own wasteland of victimhood. They are controlled by their fears and desperation, and what we see is how each person copes with this oppressive atmosphere.

When a killer is on the loose, it’s a communal catastrophe. Every soul is connected within that community, and so every person feels the pain. In the wake of similar tragedies here in the States (9/11, Hurricane Katrina, take your pick of the lot) we can see how everyone is affected by a great loss. These films explore the ways people react, the ways they cope, the ways they seek answers in the face of the chaotic meaninglessness of things.

The filmmakers construct for us a set of archetypes, and they tease them apart so that we can understand their motivations. We see the grieving mother who needs some respite from her interminable pain, we see the journalist who brazenly thinks he can solve the murders better than the police. Peter Hunter, the good cop, truly believes that he can stop the corruption that surrounds him to get to the source. We even follow a young hustler who lives through all of the suffering, lives through the pain, and comes out OK on the other end.

The truth is that we are all like this hustler. We all deal with pain and grief and sadness every day of our lives. We deal with wartime and national catastrophes and the deaths of mothers and children and lovers. That is the world we inhabit. When you look at it from the eyes of the victim, as we all do, the only thing visible is suffering. However, there are moments of clarity in which we recognize ourselves as survivors, as victors, not victims. We as a nation will never forget 9/11, but we have grown stronger in its wake. New Orleans as a city may never fully recover, but it has found a new voice, a voice that has endured.

These films show us a panorama of the human condition, how we grieve, how we cope, and how we deal with everything, yes, but also how we live. Living is something that is passive for many of us, but acknowledging life itself as an active pursuit, that is what these films achieve.

In discussing these films with a friend, I blithely said that this is the most powerfully moving and deeply affecting trilogy I have ever seen. Perhaps I was quick to say this then, but upon further consideration, I am sure that I would stand by that claim. Yes I acknowledge the greatness of the Godfather trilogy and the Dollars trilogy. I will always love the Back to the Future trilogy. But while this exists on a smaller level than the greatest of those (each film in the Godfather series is at least twice as long, and has twice the scope), it seems to take an entire situation and with no hesitation undergoes the task of actually figuring it all out.

This is the purpose of cinema, to thrill us, to scare us, but to simultaneously allow us to transcend our own reality. In the darkened room of the theater we are closed off from the world so that we can forget it for a while, so that we can see through someone else’s eyes and hear what they hear, sense what they sense. Cinema exists so that we can completely empathize with another person and understand the world that we have forgotten a little more fully. And in spite of the fact that it was produced for television, this is more profoundly cinematic than 95% of what has come out this year. It allows us to see ourselves and others not shrouded in the darkness of suffering, death and pain, but as survivors basking in the glow of life itself.