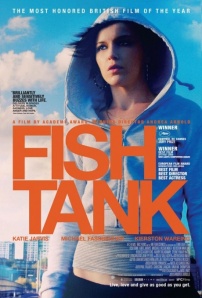 Try as we might as film critics to present an objective review of a film, one filled with points of evidence and fancy adjectives, ultimately cinema-going remains a subjective experience.  The darkness of a cinema is not the equivalent of a blank canvas; rather, the film ends up in dialogue with that in which we carry into the cinema–life experiences and even our knowledge of other stories.  I mention such subjectivity because I do not have the hubris to believe that any “Best of” proclamations should be universal.  Keeping that subjectivity in mind, I found Fish Tank to be the best film of 2010.

Take one look at Mia Williams and you’ll see she’s not a woman to be trifled with.  Her little sister Tyler spends her time tanning and her peers are strutting dance moves for the local thugs, but Mia will call you a cunt and throw you a headbutt if you give her any shit.  Of course Mia’s attitude is a necessity since the lingua franca at home consists mainly of “Bitch!” and some yelling.  Her mother Joanne Williams is more like a catty older sister than a nurturing care giver.  Sans a stable home life and lacking much of anything in the way of friends, Mia’s only reprieve is an abandoned flat she repurposes as her private hip-hop dance studio.

When Connor, Ms. Williams latest beau, makes regular appearances at their abode, Mia’s false front as an adult gives way to her secret identity as a girl needing the love of a parent.  On the streets she could pass for 19, but at home in bed without any makeup, her child-ness and fragility are on full display.  Connor becomes a solitary source of support in the chaotic family and his encouraging words about her dance moves (“You dance like a black.  It’s a compliment.”) hint at what could be a father figure.

Katie Jarvis is Mia Williams as she was plucked off the streets of Essex U.K. after a casting assistant witnessed her fighting with her boyfriend on a train platform.  Whether screaming at her mother or quietly glancing at Connor, Jarvis’s performance is never shallow.  It makes for a perfect combination with Michael Fassbender’s ambiguously-motivated Connor. Fassbender enunciates Connor’s kindness just enough to make you wince with unease–but never enough to ring all the pedophile fire alarms.  He’s a smooth operator and keeps you guessing at what’s on the horizon.

In keeping with these understated performances, director Andrea Arnold’s light touches shape the film in dramatic ways: Camera points of view are mainly anchored to Mia, and slight slow-motion moments of serenity emboss time with a halo of calming breaths.  Which, added to cinematographer Robbie Ryan’s visual flourish, makes for a refreshing look at the bleakness of impoverished living.  Though concrete apartment complexes, vacant lots, and industrial structures fill the frame, the blue sky’s bombastic pop hints that there’s a world of hope somewhere over the rainbow.

Such class contemplations fill the background beyond the physical landscape:  MTV Europe rules the Williams dwelling, dumping images of flagrant excess on the female trio (from a Ja Rule music video to an episode of Cribs) and Mia’s discovery of a horse in the middle of the grayscale environment might as well be a unicorn; these points are underscored by Mia’s visit to the wealthier, tidier side of town filled with lush grass and watered gardens.

Finally, no review of Fish Tank should go without mentioning the film’s music, which is used with sparing purpose.  A film’s soundtrack can be used like a trowel, slinging notes and beats around like wet cement to patch over bad acting or unrelated cuts. Fish Tank commits no such offenses; when the music starts it’s grooving right along with the film.  Magnificent.

Coming-of-age narratives tend to fall along polemical lines, from Larry Clark’s cynicism (Kids) or Gus van Sant’s adoration of youth’s beauty (Paranoid Park).  Fish Tank manages to situate itself comfortably between these exaggerated poles, hinting at the sublime nature of youth via visual aesthetics, while simultaneously confessing all of its sins through the story of messy characters.  In the same way La Haine provided a glimpse into the French suburbs, Fish Tank is a snapshot of the British underclass that is anything but facile.

The combination of riveting performances from Jarvis and Fassbender, the film’s absorbing narrative, excellent use of music, lyrical visuals, and moments of supreme holiness, this is hands down the best film of 2010.*

*Black Swan and The Social Network came out in the fall, which, given their proximity to the end of the year, and the award hubbub around that time, these films won’t be forgotten.  Meanwhile, Fish Tank is a great example of how a drama can fall by the wayside despite its excellence, all because it was released at the beginning of the year.  Part of this is due to the political jockeying for Academy votes (it’s hard to sustain a film’s presence in the minds of voters for a whole year), among other issues.