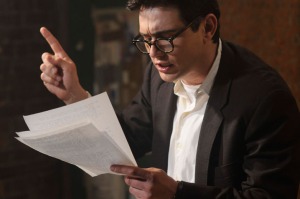 It seems that 2010 was destined to be the year of the fake documentary. The film world was buzzing with questions regarding the validity of the big three, Exit Through the Gift Shop, Catfish, and I’m Still Here, but somehow Howl, which never purports to be as factual as the others, fell by the wayside. This film, about the obscenity trial for Allen Ginsberg’s titular landmark poem, achieves the impossible: it is a documentary of things past.

When the poem “Howl” hit the streets in 1955, it kicked off publicly a movement that had already started years before. They were known as the Beats, and their bohemian lifestyle, looked down on by most of the country, was frequently accompanied by sex, drugs and jazz. The Beat Generation embraced experience and refused to meet society’s standards. So it would make sense that when the establishment got a hold of the flagship poem, of course it would be seen as obscene.

In documenting that obscenity trial, which in itself is only a third of the film, directors Rob Epstein and Jeffrey Friedman also show us the poem. They attempt to translate the poem to film, not only by reading it alongside animated sequences, but also by including an interview with Ginsberg that serves as a kind of commentary on the poem. The animation doesn’t always work, but most of the time it is completely appropriate. The film is mostly divided between these three scenes: the trial, interview, and the reading of the poem, and we move between them fluidly.

Epstein and Friedman have, it seems, created a documentary using what footage they could rustle together and what recordings and transcripts they could find, but it just wasn’t enough. So they called up a few brilliant actors and asked them to recreate the scenes. They are credited with writing the film, but their writing mostly consists of constructing and composing, because as a title card reveals at the very start: “Every word in the film was spoken by the actual person portrayed. In that sense, this film is like a documentary. In every other sense, it is different.”

James Franco is simply perfect as Allen Ginsberg; this rivals his performance in 127 Hours, which was understandably more intense. In Howl, he has transformed into Ginsberg, recreating his voice and mannerisms in such a convincing way that it is easy to forget that this is not exactly a documentary.

Perhaps the most astonishing thing to me, as much as I like the interplay between fiction and non-fiction that takes place here, was that the film succeeded in adapting “Howl.”  Not only did it make a documentary of undocumented events (the first impossible achievement), it adapted a non-narrative poem into a narrative film.  We see the events from Ginsberg’s life that inspired the poem, the darkness of ignorance crushing in through the animated sequences, and the intolerance in the courtroom. Through these occurrences we not only come to understand the significance of the specific words (especially the “obscene” ones), we see them in their larger context, the fabric of Ginsberg’s life and experiences which make up the essence of Howl.

All in all, it is a wonderfully done film. I enjoyed every minute of it, but then again I expected to. I have been a big fan of Beat literature for a long time, and as such appreciate it out of its proximity to my already established tastes. But more than being about a niche literary era that few read nowadays, it reminds us of a time we thought we had left behind. A time when there were blacklists instead of tea parties, communist agendas instead of socialist healthcare, and intolerance was rampant. With so many recent issues with the MPAA popping up in the news, we are constantly reminded that even censorship isn’t dead. Revisiting the poem, the time period, the atmosphere allows us to remember to never let the best minds of our generation be destroyed by madness.

Like Loading...
This entry was posted in Reviews and tagged Documentary, Howl, James Franco. Bookmark the permalink.