Banksy’s Exit Through the Gift Shop tickles your brain 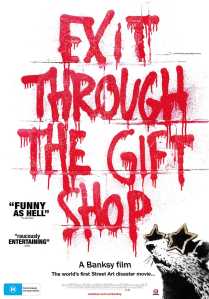 2010 was the year of the faux-documentary – or rather, the year of the “documentary…?”  Catfish, I’m Still Here, and Exit Through the Gift Shop all revolved around character studies, and left people questioning their status as “documentary.”  Exit Through the Gift Shop, the first film directed by the elusive street artist Banksy, equals the aforementioned titles in the subtleties and philosophical quandaries it presents.

Thierry Guetta is a compulsive documentor who goes nowhere without his camera.  He’s like Ricky Fitts, sans the creepy charm.  Guetta’s obsession leads to his documenting and aiding the work of street artist Space Invader; for Guetta this piques a wider interest in the street art scene.  As the new art catches the eye of elite art collectors, Guetta gets a chance to work with the White Whale of street artists – Banksy.

The infamously anonymous artist pushes Guetta to finally make a film from his collected footage, one that will explain the street art being defined by  the bourgeois. However, Guetta’s first cut is an absolute mess.  So Banksy prods the fledgling filmmaker to have a gallery opening of his own street art work.  What results is a backfire that leaves Banksy and Co. looking like Wile E. Coyote after another failure with Acme.

What was initially a film about street art turns into a film about the director; in doing so, there is an elegance to its multi-faceted truths.  As it plods along toward Guetta’s infamous gallery opening, Banksy, shrouded in a hoody and voice-changer, narrates the events surrounding his former colleague and friend.  Assorted street artists appear to discuss their art and their relationships with Guetta, wherein the personal nature of these interviews avoids the stale “talking head” moments we’ve been trained to expect from documentaries.  These aren’t experts speaking about something at arm’s length, but individuals offering personal reflections on a train wreck within their community.

The best part: Thierry Guetta may not even exist.

As discussed in-depth by the IFC News Podcast (among others),  it remains in question whether the film itself is an elaborate con – is Thierry Guetta a real guy, or just a fabrication of Banksy’s?  Either way, this is a masterful film: if its story is real, then the joke is on everyone – Banksy, the other street artists who helped Guetta, and the people who bought into the hype surrounding his Mr. Brainwash persona.  If the whole film is a con, then the joke is on all the art collectors who bought into the hype surrounding a mediocre artist.

Along with the infamous Joaquin Phoenix (faux?) documentary I’m Still Here and the mysterious Catfish, Exit Through the Gift Shop is a million dollar steak that melts in your mouth.  A great film is one that can achieve what I call a “movie moment;” a moment in the film in which all of the pieces of the puzzle come raining down into a perfect Tetris formation, leaving the audience sucker punched into contemplation.  Exit has one of these endangered species and it will leave you spinning in its wake: Is Guetta an artist or a salesman?  How do you distinguish between the two?  What’s the difference between Guetta and Banksy, or Space Invader?  Does Guetta really believe in his work, but we slam him for being more shallow than his greater contemporaries?  Analysis of motive and final assessment is what will keep this film warm for years to come.

Exit Through the Gift Shop is not for people requiring a steady diet of pyrotechnics and saturated exposition.  But if you’re looking for a documentation of the street art scene with intelligence and nuance to tease your brain, you’ve got to see this.  It’s Grade A filmmaking.

*Which parallels to Banksy’s art being removed from public spaces(sometimes carving out whole brick walls to “own” his work) and put on auction.  If the street art, which is intrinsically tied to being publicly owned, cannot be privately owned, then it does not exist.

Like Loading...
This entry was posted in Reviews and tagged Banksy, Documentary, Exit Through the Gift Shop, mockumentary, street art, Thierry Guetta. Bookmark the permalink.