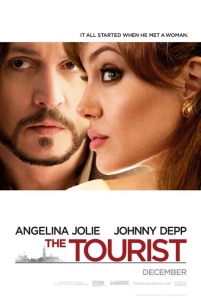 Just look at this poster for The Tourist (right).  Angelina Jolie and Johnny Depp’s faces take up 2/3 of the space.  You see those faces and you’re supposed to start sweating money for the studios – even when it’s not worth it.

Depp plays Frank Tupelo, a U.S. math teacher on a trip through Europe who gets tapped by the pretty Elise (Jolie) as a stand in for her lover, Alexander Pearce.  Too bad for Frank that Mr. Pearce is wanted by both the British Economic Police and a mobster whom Mr. Pearce stole billions from.

Depp is charming as fumbling Frank, while Jolie merely glides around regally with many slack-jawed males in her wake.  The two fail to develop the fun chemistry of Mr. and Mrs. Smith, but this is glossed over by the film’s brisk pace.

The only thing really worth mentioning is the film’s cheat of an ending.  When a film incorporates a twist, it must earn the right to do so; otherwise it earns the ire of the audience instead.  The Sixth Sense left enough bread crumbs to justify the grand reveal, but The Tourist is too lazy to do such work.

After the film spends most of its time interacting with Frank and Elise privately, in the final minutes it is revealed Frank was Alexander the whole time.  The film could have easily cruised to a conclusion without this twist, but in trying to be supremely clever proves itself supremely stupid.  With nothing to indicate Frank is not in fact a morose American math teacher, still dealing with the death of his wife, the switch less than 5 minutes from the end makes absolute no sense.

The Tourist is an “eh” spy/comedy, bouyed by pacing and Johnny Depp, but obviously has its sights set on casual entertainment as opposed to higher engagement.

Like Loading...
This entry was posted in Reviews and tagged Angelina Jolie, Cinema, Film, Johnny Depp, Movie, The Tourist. Bookmark the permalink.

One response to “The Tourist lacks spark”