Posted on December 1, 2010 by The Filmsmith | Leave a comment 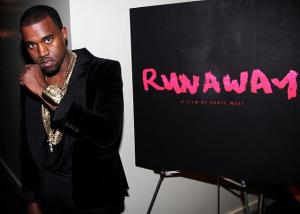 In the last year we have had three major music video events, with artists using the medium to launch videos as short films with a pace more lyrical than the usual heart attack-inducing editing style of music videos.  I commented on Lady Gaga and M.I.A.’s videos earlier this year, and now Kanye West has grabbed headlines with his 34-minute museum installation “Runaway.”

The element of of visual pleasure in music videos, which I discussed in the aforementioned Lady Gaga post, is also apparent throughout “Runaway” – most explicitly in the nearly nude Selita Ebanks as the Phoenix.  One could argue that it’s exploitation of the traditional music video form, but I would maintain that it  isn’t as blatantly objectifying as Lady Gaga’s performance in “Telephone” sans clothing.

Instead, “Runaway” is an explosion of vivid colors (the marching band section, “All of the Lights”) and the aesthetics of nature.  Shot with Phantom cameras, a fireball expanding behind Kanye is a beautiful flower in bloom; the opening section doesn’t stress the cool of the sports car driving through the forest, but its embedded presence in nature (most of the shots are composed with nature enveloping and dwarfing the vehicle). With these visual context clues, the Phoenix comes across less as a sexualized object and more as an appreciation of the human form à la Greek statues.

Further, these visuals  are not meant to be drive-by  bullets of razzle dazzle, but focal points for contemplation.  The ballet dancers for the “Runaway” segment are an astute pairing with the song’s haunting reflections, as long takes and solo dances create a divine rhythm between music, dancer, and editing style.

The point of my meanderings is that West’s first directorial effort, though using the Phoenix as a thinly veiled metaphor for his own career downfall after harassing that pretty blond girl, has reached beyond the usual trappings of music video presentations.  Instead of going to the flashiest window dressings and quick cuts, the visuals flow with the music in terms of both what they capture and how they are displayed (in other words, editing rhythm matches musical tone).  Considering the scope and audacity of “Runaway,” it’s hard to think of another music video vying for the same artistic objectives – Pink Floyd’s film The Wall is the only one that immediately comes to mind.

This is the first time Kanye West’s music has struck me as at all equal to the underrated rapper Lupe Fiasco, and without previously hating or loving West, I now find myself impressed by his aesthetic sensibilities.  Sure, some of them are pretty random – but how many music videos are logical in any sort of narrative sense?  Criticizing the separate elements to Kanye West’s “Runaway” would be like making fun of a duck for having feathers.  What West achieves is a sense of grandeur and visual pomp, without the toothache-inducing sweetness of Gaga’s Telephone, setting the bar high for future mega-music video endeavors.

For years MTV has been the butt of many jokes as it ceased living up to its title, but with its fall and the subsequent rise of YouTube, music videos can be freed from traditional censorship (YouTube will allow swearing and nudity) and time restrictions.  Is this a Renaissance for music videos?  With people like M.I.A. and Kanye West taking such artistic risks, there’s a lot to hope for.