“Waiting for ‘Superman'” bloated but powerful 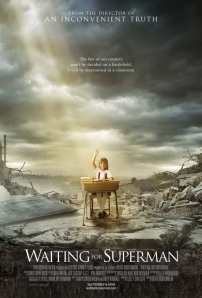 If you were to ask a teacher which film they hate the most, Dangerous Minds might be at the top of that list.  The film’s oversimplification of reaching students makes any parent think they know what it’s like to be at the head of the classroom.  By way of contrast, the documentary Waiting for ‘Superman’ could become a teacher’s favorite film–though it might depend on their own standing as a good or bad teacher–for the way the doc dives headfirst into the systemic issues of public education.

The film’s premise is that several children are waiting for their number to be called in a lottery, which will mean they get accepted into a “good” school.  The trailer seems overly dramatic (more like a game show than anything in real life), but it turns out to be true.  The problem is that if there are more applicants to charter schools than positions available, a public lottery must be held: names drawn at random receive their acceptance into one of these charter institutions (schools which receive public funding, but aren’t beholden to district rule).  As the film lays out the failings of public schools and the costly nature of private education, charter schools come out looking like the DMZ of this educational battlefield.

The first half is an awkward start, as it oversimplifies the issue of “failure factories.”  The narrative being drawn is that if you end up attending one of these schools that you’re automatically going to fail high school, drop out, never get into college, never have a good life.

This is a stereotypical Middle Class anxiety unnecessarily dropped off onto children.  Though, this stereotype is not revealed in any of the characters, which reveals director Davis Guggenheim sentiments on the matter more than subjects.  I went to a high school considered a “failure factory” and yet I just earned a Master’s in Film Studies from the University of Edinburgh.  So going to a “failure factory” doesn’t mean your life is over – although it sure won’t help a kid.

Like most of the documentaries that receive a wide release in the U.S., this one throws around heavy boulders of statistics and numbers that become exhausting.  Drop one or two info missiles, but there’s no need for carpet bombing.  When documentary filmmaker Heddy Honigmann made The Underground Orchestra she said the personal will always lead to the political; facts and figures will never drive a point home more than someone’s personal story.   The film tries to do such work while also swinging the info sledgehammer around.  The results are mixed.

Some of the most damning info includes the power of teacher’s unions, which does not allow distinctions to be made between good and bad teachers (thereby blocking any means of rewarding the good ones).  Further, firing a teacher is bureaucratically impossible, which leads to “the dance of the lemons,” where schools swap their bad teachers with other schools.

The statistics also underscore that if our country’s top students are not surpassing the top students in other countries, that cliché liberal byline about wanting the military’s budget for education actually sounds like solid policy – and via indirect means a military project (you want your country to have the smartest people to develop the best military technologies).

The film is exhaustive and could have been better displayed as a mini-series alternating between episodes dedicated to a child’s story (creative documentary filmmaking like The Underground Orchestra) and portions of journalistic tenacity (info dump here).  Despite this issue, the film’s conclusion stings like Shakespearean tragedy.  The fact that poor children (all minorities in the film; the one suburban white girl they follow won’t be attending a “failure factor” if she doesn’t get into this charter school) are at the mercy of a lottery drawing feels allegorical to what it means to be an American: You’re either born to well off parents or you’re screwed.  Your only hope beyond that is a miracle/lottery pick.

For those who are totally oblivious to education politics, this film is definitely a must.  Even as someone who fairly recently graduated from high school, befriended quite a few teachers (thus learning some of the shady stuff), and even considered being a high school history teacher, it opened my eyes to quite a few things.  It has some warts, but I’d give it a B- or a C +.