In Danse Macabre, Stephen King says there are three types of horror: terror, horror, and revulsion/disgust.  The first is psychological, the second terrifying based on sight, and the third a horror stemming from a reaction to grotesqueries.  With most horror films playing into straight horror (“Look at that freaky monster!”), I thought I’d suggest some stories that fit the “terror”category–things that keep your brain churning as you try to sleep…. 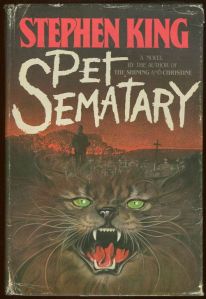 Prior to the release of Stephen King’s book Pet Sematary in 1983, there are several interviews in which King describes stories that go into “the trunk.”  The stories in “the trunk” are those walking too far out into the dark shadows of the mind.  Pet Sematary was just such a story (his wife Tabitha told him it was a “trunk” story), hinted and teased at for years until its publication, whereby it lived up to its reputation.  Sematary describes the unspeakable things man will do while grieving for a loved one. When I read this back in high school, SPOILER ALERT the scene in which Louis Creed sings a Ramones song while digging up his dead son was particularly chilling.SPOILER ALERT OVER

The film adaptation did such a superb job of maintaining the integrity of the book that it was banned in several countries for several years.  Interestingly, it’s directed by Mary Lambert.  With so few female directors in the film industry generally, a female director on a horror film is even rarer – and she does a damn good job.

Though one of the final battles is slightly goofy, the other truly creepy parts (my friends and I still make jokes about Achilles tendon damage) keep it on course.

An X-Files episode that aired once for Halloween and was never repeated due to its controversial content, Home makes that toilet monster feel like a cuddly teddy bear.

Mulder and Scully investigate the murder of a deformed child, which leads them to a reclusive family which is into – ahem – “some dark shit.”    Less than what we actually see, the overall tone of the episode is enough to remind you of the terror you felt as a kid hearing your first good horror story (the hook handed man anyone?).  Just thinking about it is unsettling…

Know any particularly creepy stories (book or film)?  Post below with your favorites.