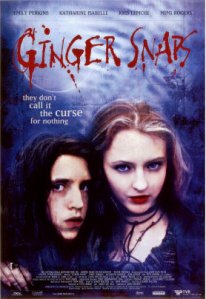 Though the final part of the Ginger Snaps trilogy is weak, it’s not Spider-Man 3 weak. Given the track record of horror film sequels, the entire trilogy stands up pretty well. The real strength of the series lies with the characters, specifically female lead characters. The male cast members are all supporting pieces to the story (though they play bigger parts in Ginger Snaps Back), so we get a fresh perspective as Brigitte and Ginger lead us through female territory: sisterhood, mother-daughter relationships, sex, menstruation, relationships with men, etc.

Ginger (Katharine Isabelle) is featured prominently on the DVD covers as “the pretty one,” but she ultimately takes a back seat to the true main character, Brigitte (Emily Perkins): we see Brigitte grow some ovaries and stand up to her sister in Ginger Snaps and re-fight the monster in Ginger Snaps Unleashed (a la Ripley re-fighting the xenomorphs in Aliens). Despite her being relegated to “runt” status, the trilogy couldn’t stand without Brigitte.

My film professor recently challenged my thought on genre distinctions. He said that relegating certain films into the horror category neuters their power.  When someone tries to define or elevate the status of a horror film by calling it “a good horror film,” they are merely talking about achieving art — something which transcends all these silly genre distinctions.